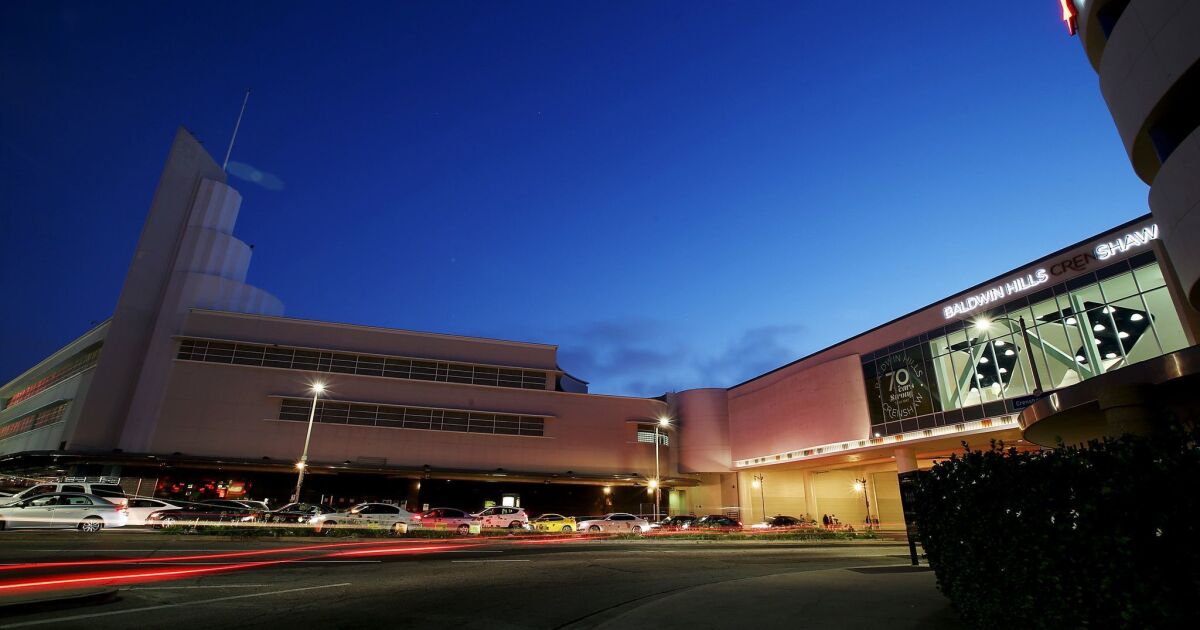 New buyers have emerged for Baldwin Hills Crenshaw Plaza, a sprawling regional mall that has been a focal point of the South Los Angeles community since shortly after World War II but has struggled for business in recent decades.

New York real estate companies LIVWRK and DFH Partners have been selected by the current owners to acquire the 40-acre property at Crenshaw and Martin Luther King Jr. boulevards, the sellers said.

The sale is expected to close before the end of the year. No price was disclosed, but offers to buy the mall earlier this year, including one from Los Angeles developer CIM Group, exceeded $100 million.

CIM Group agreed to buy the mall in April but backed out of the deal in June in the face of resistance from neighborhood activists who objected in part that CIM’s plans didn’t add housing to the complex, which was approved by the city for previous owners, and would focus instead on converting vacant department stores to offices for rent.

The founder of LIVWRK, Asher Abehsera, said he will talk to local residents before deciding on a makeover plan. “A project of this scale affords a mix of uses,” he said.

The 869,000-square-foot mall with a Cinemark movie theater has been mostly closed since March because of the COVID-19 pandemic, but the struggling center had previously lost anchors Walmart and Sears, which together occupied about a third of the mall’s total space. Its Macy’s department store and IHOP restaurant are not included in the pending sale.

Abehsera said he named his company LIVWRK, a shortening of live-work, because he believes neighborhoods thrive best when they are home to commercial and residential uses that engage people day and night. An underground light-rail stop is set to open next year at Crenshaw and Martin Luther King Jr. boulevards.

The company he founded in 2013 concentrates on mixed-use urban developments such as Dumbo Heights, a six-building warehouse complex built by the Jehovah’s Witnesses to manage its publications that is now being converted to an office and retail center. Another Brooklyn project involved converting a former Wild Turkey whiskey distillery to condominiums.

LIVWRK has active real estate projects with CIM Group, Abehsera said, but Baldwin Hills Crenshaw Plaza is not one of them. Abehsera has also partnered with Jared Kushner on past real estate ventures.

“Neither Jared nor his family have any investment in my company or this deal,” Abehsera said. “I have had no involvement with Jared since he went to work with his father-in-law,” President Trump.

Absehra, 37, said he grew up in Los Angeles and moved on to start his real estate business in New York. He returned to Los Angeles about a year ago.

His financial partner in the Baldwin Hills Crenshaw Plaza project is DFH Partners, a commercial real estate investment firm based in New York.

“We see a singular opportunity to invest and participate in this very special property in the heart of the Crenshaw corridor,” said Rochelle Dobbs, founding principal of DFH Partners, in a statement. “We are excited to work hand in hand with LIVWRK and leaders throughout the area to ensure this property remains a vibrant community anchor for decades to come.”

The most high-profile opponent of the previous planned sale to CIM Group was Crenshaw Subway Coalition, a local activist group that filed a lawsuit claiming the city entitlements granted in 2018 for development on the site violated the California Environmental Quality Act and federal housing laws.

One of the activists behind the lawsuit is Damien Goodmon, who is part of a Los Angeles group that seeks to raise money to buy the mall.

“The bottom line is that this battle is not over, it is simply the latest saga to wrestle control of the Crenshaw Mall out of the hands of those who would do the Crenshaw community harm and into the hands of the community,” Goodmon said in a statement about the pending sale. “We’re going to focus our energy on continuing to organize the people, further strengthening our offer and the people-supported plan.”

A representative of the Baldwin Hills Estates Homeowners Assn. said he has had discussions with LIVWRK and is optimistic that improvements to the mall won’t turn into “a gentrification bomb” for the neighborhood.

“We do not want this to be tied up,” John Gonzales said of the pending sale. “The key is to protect the neighborhood and make it as beneficial to everyone as it can be.”

Baldwin Hills Crenshaw Plaza traces its roots to 1947 with the opening of Broadway and May Co. stores, complemented by shops and restaurants.

In the 1980s, Mayor Tom Bradley wanted to see a major shopping center in the neighborhood and encouraged linking the stores to create an indoor mall that was completed in 1988.

Capri Capital Advisors of Chicago bought the mall for $136 million in 2006 and spent more than $35 million on upgrades, including a makeover of the movie complex formerly operated by retired Lakers star Magic Johnson.

The mall has been controlled since 2019 by a Chicago private equity fund of institutional investors called Capri Urban Investors.