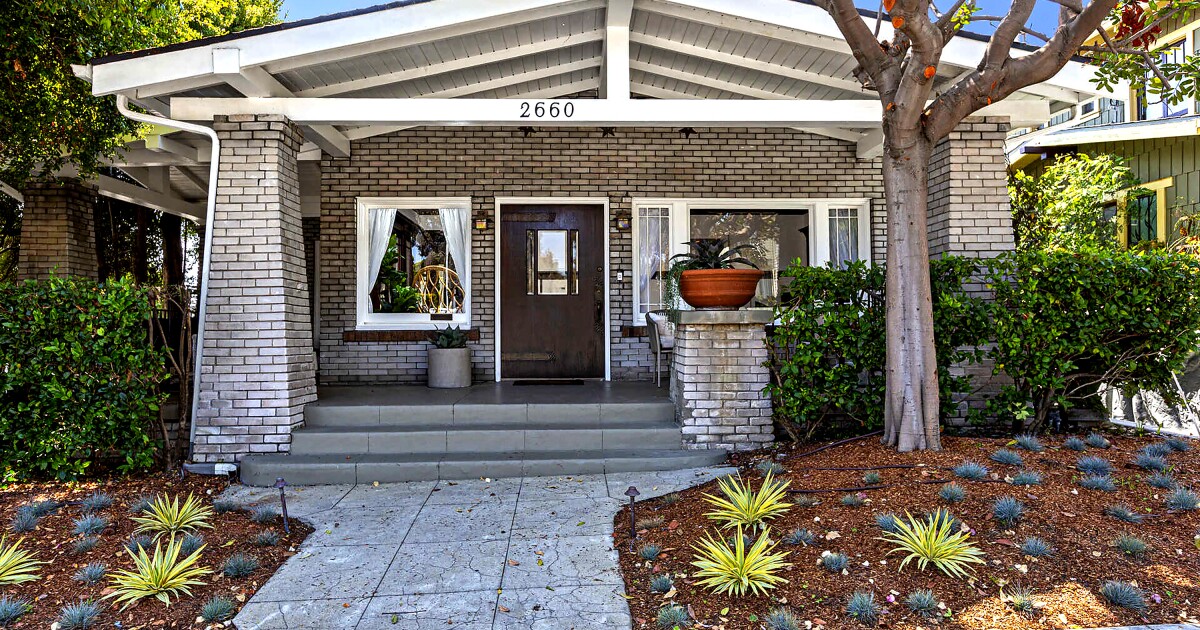 Every Hollywood idea has to start somewhere, whether it’s scribbled on cocktail napkins, pecked out on a vintage typewriter or the outcome of an afternoon in the writers’ room. For the sitcom “The Last Man on Earth,” the idea came around the dining room table at the Santa Monica home of show star Will Forte.

Forte is now ready to part with the house where he and his team penned the Emmy-nominated show’s first episode, listing the classic Craftsman for $2.45 million.

In the Ocean Park neighborhood on a corner lot, the brick-accented home maintains its classic character while incorporating subtle updates involving skylights, hardware and fixtures. Box-beam ceilings, window details and the extensive use of wood in the interior are among period details of the 107-year-old home.

The living room retains its original built-ins and a brick fireplace, and an original wood banquette fills a wall in the nearby dining room. A galley-style kitchen, a breakfast room, three bedrooms and two bathrooms complete the two-story floor plan.

Outside, the home’s covered front porch extends around the side to create a small outdoor patio. A private sun deck sits off the back.

Forte bought the house in 2002, shortly after joining the cast of “Saturday Night Live.” The sketch artist, comedian and actor had an eight-year run on the show, originating such roles as NASA recruiter, the Falconer, and special operations agent MacGruber — which spawned a feature film that was also fleshed out around his dining room table.

More recently, Forte starred in the Quibi comedy series “Flipped” and had a voice role on Syfy’s “Alien News Desk.” He is reportedly developing a “MacGruber” television show for NBC.

Jagger Kroenner and Michael Grady of the Agency hold the listing.

Emmy-winning actress Patricia Heaton and her husband, actor-producer David Hunt, have sold a Toluca Lake home they owned in a trust for $7.5 million.

Set behind hedges and gates, the Mediterranean villa-style home was designed by architect Kevin Clark and built in 1998. Updated during Heaton and Hunt’s stay, the two-story house features custom millwork, new hardwood and marble floors and an overhauled chef’s kitchen. There are five bedrooms and seven bathrooms in about 7,650 square feet of interior.

Outside, the three-quarter-acre lot has a glass-tiled swimming pool and spa, a built-in barbecue/bar and a fireplace. Gardens, lawn and a pool house complete the grounds.

Heaton is known for her long-running matriarchal roles on the sitcoms “Everybody Loves Raymond” (1996-2005) and “The Middle” (2009-18). More recently, she appeared on the sitcom “Carol’s Second Act” and hosted the cooking show “Patricia Heaton Parties.”

Hunt gained fame as an actor in the “Dirty Harry” film series as well as the British period drama “The Black Velvet Gown.” As a producer, his credits include “Carol’s Second Act” and the upcoming coming-of-age comedy “Winners,” for which Heaton is also an executive producer.

Parting with her private property

Betty Thomas, the Emmy-winning actress from “Hill Street Blues” who went on to direct films such as “Private Parts” and “Dr. Dolittle,” is hoping for another hit in the Hollywood Hills. Her modern compound of 16 years just hit the market for $6.995 million.

The one-acre estate makes the most of its space with a circular motor court, a sleek, angular home, a guesthouse and a studio — all of which have balconies overlooking Los Angeles.

A walkway of stone circles approaches the modern exterior, and inside, large living spaces have beamed ceilings and walls of glass. The main level opens to a massive wood terrace with lounges and dining areas and adjoins a swimming pool.

Fireplaces anchor the kitchen, family room and master suite, one of five bedrooms and 4.5 bathrooms in about 5,700 square feet. The master suite takes up the entire top level and has geometric windows, skylights and a wet-room-style bathroom.

Steps descend to the guesthouse and studio in the backyard. The front of the property features a flat, grassy yard with a covered dining area.

Thomas received seven Emmy nominations and one win for her role as Officer Lucy Bates in “Hill Street Blues” before directing a handful of high-grossing films, including “The Brady Bunch Movie,” “28 Days” and “Alvin and the Chipmunks: The Squeakquel.”

Deedee Howard of the Agency holds the listing.

Moving on from old home field

Call it one last pass in San Diego for Philip Rivers. The longtime Chargers quarterback, who joined the Indianapolis Colts this offseason after 16 years with the Bolts, has sold his home in the gated Santaluz neighborhood for $3.675 million.

Originallylisted in April for $4.199 million, the Spanish-style home’s price was cut to $3.699 million in June before catching an offer six weeks later. Rivers bought the estate through a trust in 2009 for $3.299 million.

Built in 2005, the home sits on more than an acre of grounds with a saltwater swimming pool, a putting green, lawn and a playhouse. Inside, the 6,800-square-foot interior has arched doorways, vaulted ceilings, a wood-paneled office and a kitchen with two islands. There are six bedrooms and 6.5 bathrooms on a single story.

Covered patios, a massive fireplace and a built-in barbecue extend the living space outward. The fenced and gated property overlooks the greens and fairways of the nearby Santaluz Club golf course.

Rivers, 38, was a model of consistency during his 16 years with the Chargers, making 235 consecutive starts (including 11 playoff games). An eight-time Pro Bowl selection, he holds franchise records for more than 30 categories, including passing yards and touchdowns.

He agreed to a one-year, $25-million deal with the Colts in March after the Chargers publicly announced in mid-February that the team and quarterbackhad mutually parted ways.

Kellan Lutz, who found fame as Emmett Cullen in the “Twilight” franchise,” has finally sold his place in Playa Vista. The actor’s three-story home spent nearly two years on the market and saw its price cut six times before trading hands last month for $2.799 million.

Built in 2017, the contemporary house with a sleek gray exterior opens to sunny living spaces with recessed lighting and hardwood floors. On the main level, there’s a bright open space with a living room, a dining area and a tiled kitchen.

An elevator leads to the second story, where the master suite expands to a private balcony. It’s one of four bedrooms and five bathrooms in 3,639 square feet.

On the top floor, a family room opens to a covered deck through sliding glass doors. The outdoor space overlooks the neighborhood, which has a dog park and soccer field.

A native of North Dakota, Lutz appeared in all five “Twilight” films, from 2008 to 2012. More recently, the 35-year-old played Poseidon in “Immortals” and Hercules in “The Legend of Hercules.”