It’s Not Too Late for a Flower Garden 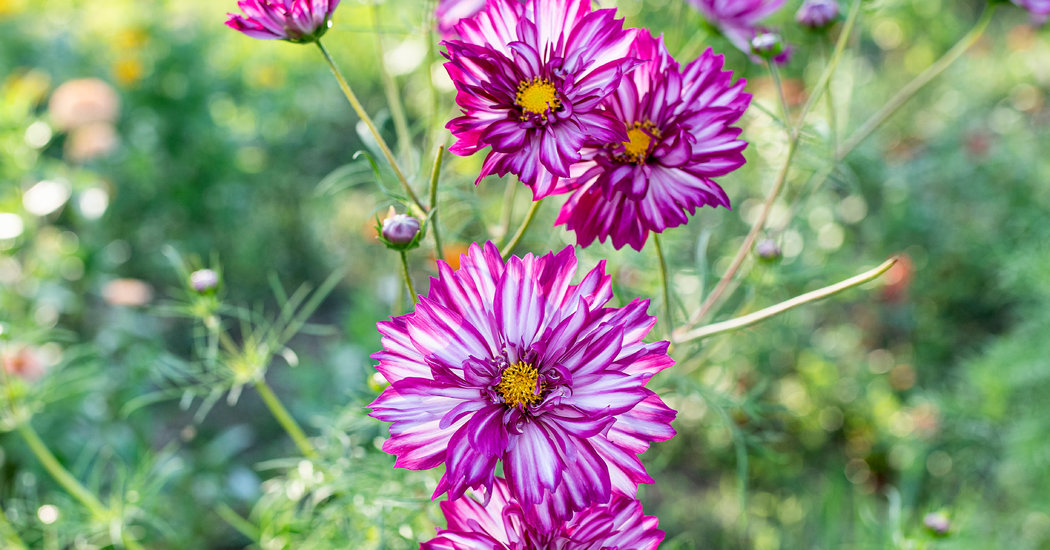 My farmer-florist neighbor Jennifer Elliott’s 15-acre organic operation in the Hudson Valley is like a giant cutting garden from April to November. So it was to Ms. Elliott and another flower-focused friend that I turned for a strategy in a year when having some version of what she has, at least in miniature — the cheer of homegrown color — seemed like just the thing.

We need to grow food, yes, but also to make room out back for some food for the soul.

Admittedly, many of us are off to a late start, with seed access delayed by unparalleled demand. That means some of those back-of-packet instructions — which often call for starting seeds indoors, under lights, six weeks ahead and transplanting them as the weather settles — might not be possible. But I’m adopting the plan that enables Ms. Elliott to produce a nonstop supply of blooms for her Tiny Hearts Farm, which in a normal year serves wholesale customers, subscribers to a weekly flower CSA and retail customers to her flower shop, plus weddings and other events she designs.

Her strategy: Sow most annuals as many as four or five times a season. The way I grow lettuce — in waves, so that before the first sowing turns bitter, you have another coming — is how she grows zinnia, marigolds, cosmos, gomphrena, celosia, sunflowers, nigella and more.

We can simply start now, at what would be Ms. Elliott’s second round, and stop there. Or maybe do one more.

Over in Union, Conn., Marilyn Barlow has offered mail-order flower seeds and seedlings for transplanting at Select Seeds, a business that began in her living room 33 years ago, fueled by a passion for antique varieties. She and her daughter, Allison, now run the business together, selling historic seeds, as well as the latest selections.

Ms. Barlow breaks down the rough sowing timeline this way: Hardy annuals like cornflower, poppy, calendula, larkspur, love-in-a-mist (Nigella damascena) and sweet alyssum should be direct-sown outdoors before the last frost date. In her location, in Zone 6a, that means before early to mid-May. (In warm-winter areas like Zones 8 to 10, however, hardy annuals are sown in late fall; you can check your Plant Hardiness Zone here.)

Those categorized as “half-hardy annuals” — including amaranth, basketflower (Centaurea americana), cleome, marigolds and cosmos — are often started indoors under lights six weeks before setting out after frost, but they can be direct-sown at the last frost date for summer flowers. Sunflowers, which Ms. Elliott direct-sows every two weeks at her farm, fall into this category.

A third grouping, the tender annuals — morning glory, moonflower, zinnia, nasturtium and dahlia (from seed or tubers) — are direct-sown a week or two after the last frost for midsummer-to-frost blooms. Two vining morning glory relatives that delight hummingbirds are in this grouping: cardinal climber (Ipomoea x multifida) and Spanish flag (Ipomoea lobata). So are hyacinth bean (Dolichos lablab) and cup-and-saucer vine (Cobaea scandens).

That means there is still time — and now there are also resources. Some suppliers who paused home-garden orders to make sure farmers were supplied, or were simply overwhelmed, are starting to ship again. And independent garden centers are generally open, at least for pick-up orders.

Gardeners may also find assistance in unexpected places, where Covid-19 shifted business plans. At farms like Tiny Hearts, for example, instead of planting all the tubers this year, the owners quickly pivoted and set up an online shop for mail-orders of some of them.

Not Your Average Zinnia or Cosmos

When Ms. Elliott and Ms. Barlow say “zinnia” or “cosmos,” they don’t mean some generic version that you might visualize.

Besides pink and white, cosmos come in ruffled, double-flowered forms like the Double Click series, including a bicolor violet-and-white, as well as orange and even pale yellow (like Xanthos or Apricot Lemonade). Zinnia range in scale from tall to front-of-the-border flowers like Starbright Mix and White Star.

“Those are my favorites, actually — the Zinnia angustifolia,” Ms. Barlow said. “Those are really more for garden edging, and really beautiful. They are also disease-resistant, which makes them extra-nice.”

Want maximum butterflies from your zinnia? Single-flowered varieties are always a hit. At the other extreme are those bred to look like scabiosas, with a puffy center (like Zinderella Peach).

Ms. Elliott said she is “obsessed with the Oklahoma series,” especially the salmon and golden yellow colors of this tall type, and she and Ms. Barlow share a soft spot for a Zinnia haageana called Jazzy Mix, described in the Select Seeds catalog as “a kaleidoscope of color and pattern in yellow, cream, chestnut, and rosy red.”

Getting the Most Abundant Blooms

In addition to doing successive sowings — not four or five like Tiny Hearts Farm, but maybe two — you can encourage productivity over the longest season by pinching young annuals.

“We basically pinch everything,” Ms. Elliott said, “except sunflowers, and the brain celosia, because those won’t form that big center flower if you pinch them.”

Her general rule: When a flower is about four inches high or has four or five sets of leaves, pinch it down to three sets. “Even cosmos does much better pinched,” she said. “It seems really harsh and scary, and like you’re killing your plant, but it lets you get more and taller flowers.”

How to Grow Dahlias

Dahlias, the prize of the late-season flower garden, blooming from late summer till the first freeze, are often grown from tubers. At Tiny Hearts, tubers showing a budding eye, or growth point, are planted directly into the field around mid-May, laid on their sides, six inches deep. A scoop of compost goes in at planting time, and Ms. Elliott and her partner, Luke Franco, spray a kelp-fish emulsion on the dahlia foliage every 10 days or so to keep feeding these hungry plants.

Even as far south as Georgia, the timing is similar. The University of Georgia Extension advises planting tubers in April in southern Georgia and in May in the northern part of the state, but notes that June plantings often result in the best fall flowers.

In a farm setting, polypropylene netting with large openings is stretched parallel to the ground, and stems grow up through it. But in a garden setting, Ms. Elliott said, a bamboo tepee and some twine work better.