Hot Property: The $30-million mansion that once got Prince in hot water 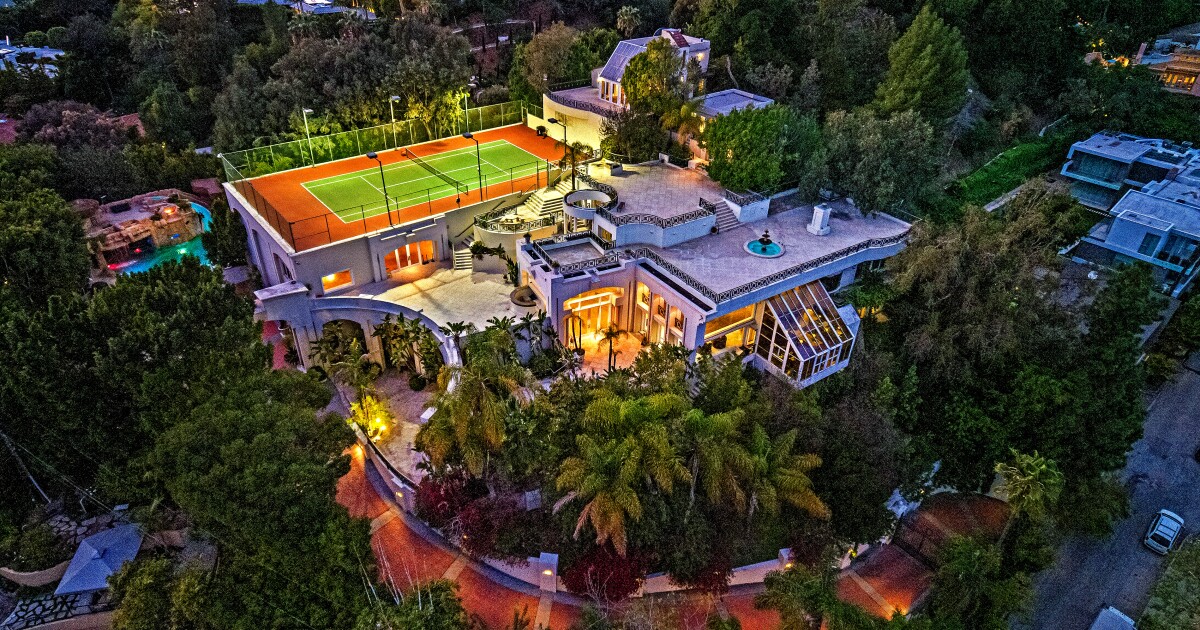 Above the Sunset Strip, a palatial estate with a wild Hollywood history is for sale at $29.995 million.

Since its inception, the 18,000-square-foot stunner has drawn looks and made headlines for its over-the-top style and for the string of high-profile names attracted to its eccentricity.

L.A. contractor and noted partyer Hal B. Hayes built the home in 1953, erecting a six-level steel-and-glass showplace that would serve as the ultimate bachelor pad. According to The Times, he included a mirrored master suite, orchid greenhouse, rooftop garden, artificial beach for topless tanning and an indoor-outdoor lagoon that accessed a secret, sealed underground cave aerated with oxygen tanks. Hayes’ home was equipped for an all-night rager or a nuclear war.

Over the years, other owners included film producer Ted Fields and Rockstar energy drink creator Russ Weiner. The prime property reached its peak of notoriety, however, when NBA star Carlos Boozer bought it in 2005.

As Boozer told the Undefeated, he couldn’t live in the home during the basketball season and decided to rent it out to a mystery buyer who allegedly offered $95,000 a month. The big spender eventually revealed himself to be Prince, and the next time Boozer returned home, the iconic musician had stylistically overhauled the entire place.

Gold lions on the 12-foot gates were replaced with the Prince symbol. Italian carpets were stripped in favor of bold shades of purple and black. The master suite boasted a heart-shaped bed. The spare bedroom had been turned into a hair salon; the weight room, a dance floor.

Boozer sued Prince for violating the lease, according to the Smoking Gun, but later said the pop star smoothed things out by wiring him $500,000 and promising to return the home to standard form by the end of the lease. Boozer said he kept his word.

Today, the home carries an extravagant style, but with much less purple. Across 2.15 acres, it centers on a 10-bedroom, 13-bathroom mansion of more than 18,000 square feet, with a ballroom, wine cellar, two-story gym and solarium. Also included is an English Tudor home on an adjacent lot. Outside, amenities include a fountain, tennis court and resort-style pool with a grotto and water slide.

Jason Oppenheim, who stars in Netflix’s “Selling Sunset,” is listing the property with Mary Fitzgerald and Peter Cornell of the Oppenheim Group and Brian Stace of Pinnacle Estate Properties.

In the rear-view mirror

The longtime Bel-Air home of Lee Iacocca, the late automobile titan who brought Chrysler Corp. back from the brink of bankruptcy in 1979, has sold for $19.5 million.

Owned by the Iacocca family since the early 1990s, the gated estate came up for sale in January for $25.999 million and entered escrow in March — just as the coronavirus threw a wrench into L.A.’s real estate market. But unlike the many pending sales that have fallen out of escrow during the pandemic, the multimillion-dollar transaction closed last week.

Set on more than an acre, the two-story home has a grand foyer with arched ceilings, a wood-paneled den and a great room. There are five fireplaces, including two in the expansive master retreat. A total of five bedrooms and eight bathrooms includes an apartment for staff.

French doors lead out to a stone pavilion, a swimming pool and formal gardens. Also on the grounds is a lighted tennis court.

Iacocca and his family were the original owners of the property.

The former Ford and Chrysler executive, who died last year at 94, helped pioneer the Mustang and Pinto lines while at Ford in the 1960s. In 1979, Iacocca joined Chrysler as its chief executive and helped stabilize the auto manufacturer that had been left in ruins by previous finance-trained chairmen.

He was featured last year as a character in the Oscar-winning film “Ford v Ferrari.”

Rick Hilton and David Kramer of Hilton & Hyland were the listing agents. Kramer and Kevin Anderson, also with Hilton & Hyland, represented the buyer.

In Malibu, an oceanfront home owned by billionaire philanthropist Eli Broad has come back up for sale at $75 million.

The modern-style residence, designed by Getty Center architect Richard Meier, hit the market in February for the same price but was briefly taken off the market in late March amid the growing coronavirus outbreak.

Located on coveted Carbon Beach, the estate is made up of two parcels with two structures and more than 100 feet of beach frontage.

Broad acquired the two properties — including one owned by Madonna’s former manager, Freddy DeMann — in the late 1990s for a total of $5.65 million, records show, and commissioned the New York-based Meier to design the compound.

Clad in white aluminum panels with frosted glass, the 5,374-square-foot home is a familiar cousin of sorts to Meier’s other projects, such as the Gardone residence in Italy and the Rachofsky house in Dallas. Inside, interiors by Rose Tarlow feature a clean aesthetic, with white walls, light wood floors and high ceilings. Towering walls of glass in the living room center on the Pacific.

Including the guest house, there are five bedrooms and seven bathrooms. Ocean-facing decking and balconies expand the living space outdoors.

Broad, 86, co-founded KB Home and founded the L.A.-based retirement savings firm SunAmerica, which he sold in 1999 in a multibillion-dollar stock deal.

A major influence on Los Angeles’ art scene, Broad helped create and establish L.A.’s Museum of Contemporary Art in 1979 and is a life trustee of the Los Angeles County Museum of Art. He also founded the Broad museum in downtown Los Angeles to house the collection of contemporary art that he and his wife, Edythe, have amassed.

Branden and Rayni Williams of Hilton & Hyland hold the listing.

In a deal between celebrity offspring, actress Mamie Gummer has sold her treehouse-like residence in the Hollywood Hills to designer Jennifer Nicholson for $1.65 million.

Perched in Beachwood Canyon, the 1940s wood-clad home sits above the street, with a wraparound deck to take advantage of the scenery. French windows and skylights brighten the bohemian-vibe living spaces, which boast floors of ceramic tile and hardwood.

Beamed ceilings and a freestanding fireplace touch up the living room. In the country-style kitchen are double sinks, copper countertops, and a retro stove. Three bedrooms and 2.5 bathrooms complete the interior.

Gummer has credits that include the medical drama “Emily Owens M.D.,” as well as “The Good Wife,” “Off the Map” and “True Detective.”

Nicholson appeared in the film “Johnny Christ” and works as a fashion designer and retailer.

Mayoral residence with a view

R. Rex Parris has served as Lancaster mayor since 2008, but he’s diversifying his real estate portfolio elsewhere, paying $6.627 million for a coastal home in Laguna Beach.

Perched on a corner lot in Emerald Bay, the two-story home enjoys sweeping ocean views from window-lined living spaces and a pair of expansive terraces. Inside are four bedrooms and 3.5 bathrooms in 4,852 square feet.

The open-concept floor plan has beamed and vaulted ceilings, hardwood floors and a living room with a brick fireplace. In the chef’s kitchen, there’s a dining area and a wet bar.

The quarter-acre lot also includes a brick walkway, landscaped yard and spa. It’s located about half a mile from the beach.

Parris, who also works as a trial lawyer, is serving his fourth term as mayor after last being reelected in 2016.