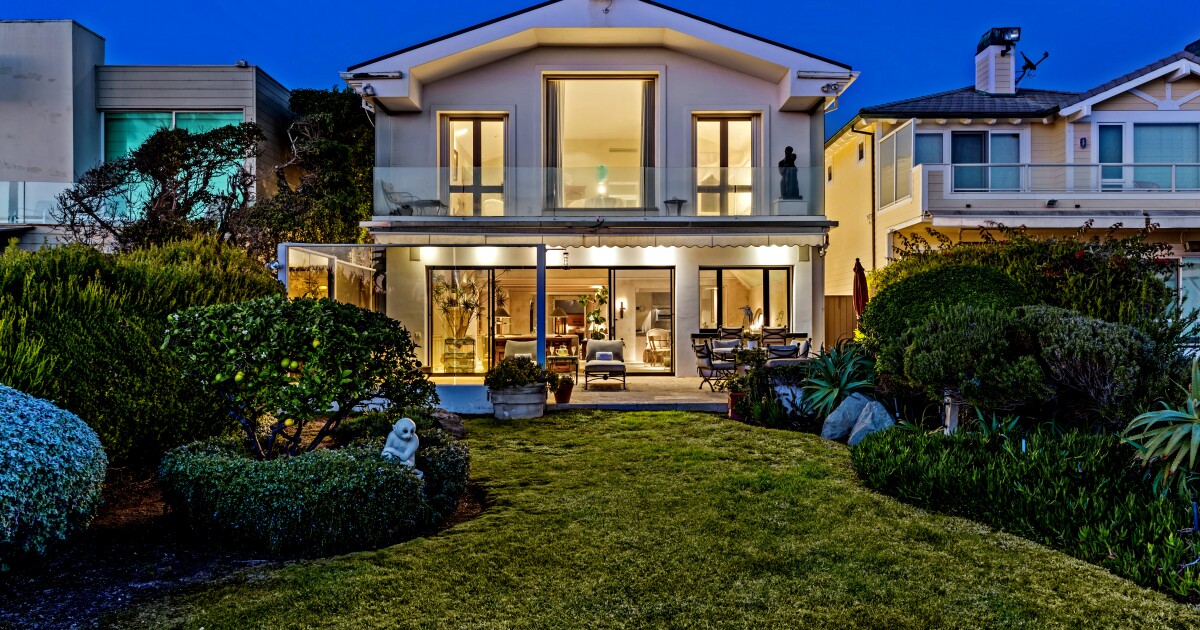 Kaling, who acted, produced, directed and wrote for “The Office,” had been in sell mode over the last few years. She unloaded her Hollywood Hills home for $1.61 million in 2017 and sold her 1920s Spanish-style spot in Beverly Grove a year later.

Architect Ted Grenzbach designed the coastal estate, which holds seven bedrooms and nine bathrooms in 5,824 square feet. Outdoor spaces include a terrace off the master suite, a courtyard with a plunge pool and a spacious patio overlooking the ocean.

Inside, the open floor plan is loaded with tile, hardwood and eye-catching built-ins. There’s a dining area, chef’s kitchen, living room with a fireplace and wet bar that’s accessible from both inside and outside.

An elevator ascends to the second story, where an expansive master suite has dual bathrooms, a steam room, hair salon and a lounge with a fireplace. Oversize windows survey the long, landscaped yard that leads to 40 feet of beach frontage.

Sinatra, who died in 1998 at age 82, sold more than 150 million records during his prolific music career. He led the Rat Pack, which included entertainers Dean Martin and Sammy Davis Jr. Among Sinatra’s hits were “Strangers in the Night,” “My Way” and “New York, New York.”

His real estate collection spans Southern California, and a few of his homes have come up for sale in recent years. In 2018, Villa Maggio — a hilltop retreat built for the crooner on seven acres in Palm Desert — hit the market for $4.5 million. Later that year, a chic Midcentury home he once leased for a decade listed in Chatsworth for $12.5 million.

Julia Roberts is spending big in San Francisco. A trust tied to the Oscar-winning actress has paid $8.3 million for a century-old Victorian Revival-style home in the city’s Presidio Heights neighborhood, records show.

The trust is the same one that has purchased most of her country-spanning collection of real estate, including a scenic ranch in Malibu’s Point Dume and a West Village co-op in New York City.

This one offers a much different feel, drawing the eye with a shingled exterior and slate roof. Inside, five levels of living spaces have five bedrooms and 4.5 bathrooms in about 6,200 square feet.

Other highlights include an office, bonus room, wet bar and wood-paneled wine cellar. The home has multiple balconies, taking in views of the San Francisco Bay and Golden Gate Bridge. Out back, a tiered patio features landscaping and a dining area.

The property first listed last summer for $10.25 million before a September price cut brought the tag down to $9.65 million, according to the Multiple Listing Service.

Roberts, 52, won an Academy Award for “Erin Brockovich” and received nominations for “Steel Magnolias,” “Pretty Woman” and “August: Osage County.” More recently, the Georgia native starred in “Wonder,” “Ben Is Back” and “Homecoming,” which she also executive produced.

She made another big splash in 2016, selling her oceanfront estate in Hawaii for $16.2 million.

Looking to hand one off

Former USC football great Lynn Swann, who last year resigned as athletic director at his alma mater, has listed his home in historic Hancock Park for sale at $3.595 million.

Designed by Naomi Kobrin, the two-story house has an open-concept floor plan, high ceilings and pocketing glass walls that open to the backyard. Some 4,300 square feet of living space contain a living room with a two-way fireplace, a center-island kitchen, five bedrooms and 5.5 bathrooms. A small wet bar sits below a floating wood-and-steel staircase.

Outside, hedges and fencing conceal a dining patio and saltwater swimming pool. An expansive terrace with a fire feature creates additional living space on the home’s second story.

Swann, 67, was a standout wide receiver at USC and went on to win four Super Bowls in the NFL with the Pittsburgh Steelers. After his retirement in 1982, he worked as a broadcaster for ABC Sports and served as chairman of the President’s Council on Fitness, Sports and Nutrition (2002-05).

Wine country estate is quite the production

In Napa Valley, the French country-style compound of Steven Bochco — the late TV producer behind “L.A. Law” and “NYPD Blue” — has quietly surfaced for sale at $8.5 million.

The estate, which is currently owned by Bochco’s widow, Dayna, encompasses 47 acres in the western hills of Oakville. The property, offered off-market, includes a European-style main home, a guesthouse and an olive grove among expansive vistas and rolling vineyards.

Manicured gardens approach the ivy-covered home, which has three bedrooms and a handful of formal living spaces in 4,600 square feet. Everything is light inside, from the tan walls to the tile floors to the white coffered ceilings in the indoor-outdoor dining room.

Other highlights include a voluminous great room, center-island kitchen, library and cozy lounge. Upstairs, one of the bedrooms extends to a Juliet balcony overlooking the hilly landscape.

The backyard is a space all its own. Dotted with terraces, dining areas and small lawns, it extends to a flagstone patio with a swimming pool and spa.

He owned a variety of real estate over the years, including an Encino Midcentury designed by Richard Neutra that he sold for $4.725 million in 2015 and a coastal estate in Hawaii that he unloaded for $11.5 million two years later.

Beasting in a tropical locale

The Oakland native, who helped the Seahawks win Super Bowl XLVIII, purchased a 2,831-square-foot, five-bedroom, three-bathroom home that occupies a 9,516-square-foot parcel of land in the Mokuleia area of Waialua for $1.1 million.

The property has a total assessed value of about $872,000, according to property tax records. Lynch’s estate is next to the Hawaii Polo Club field and the Dillingham Air Field.

The Mokuleia area, which is fairly secluded, is rich with beautiful beaches and lush hiking trails.

Lynch was in Hawaii last year, hosting a kids football camp with his NFL-playing cousins Marcus Peters and Josh Johnson, who co-founded the Oakland-based Fam 1st Family Foundation in 2006.

Lynch, a notorious fan of Skittles, is nicknamed “Beast Mode” for his hard-charging running style. He played college football at UC Berkeley and was drafted by the Buffalo Bills in 2007.

He was traded three years later to Seattle, where he made four Pro Bowls and led the NFL in rushing touchdowns twice before retiring in 2016. Lynch came out of retirement the following year to play for his hometown NFL team, the Oakland Raiders.

Lynch came out of retirement for a second time toward the end of the 2019 NFL season to join the Seahawks in their regular-season finale against the archrival San Francisco 49ers and in Seattle’s two playoff games.