After School Shootings, a Push for Openness Over Barricades 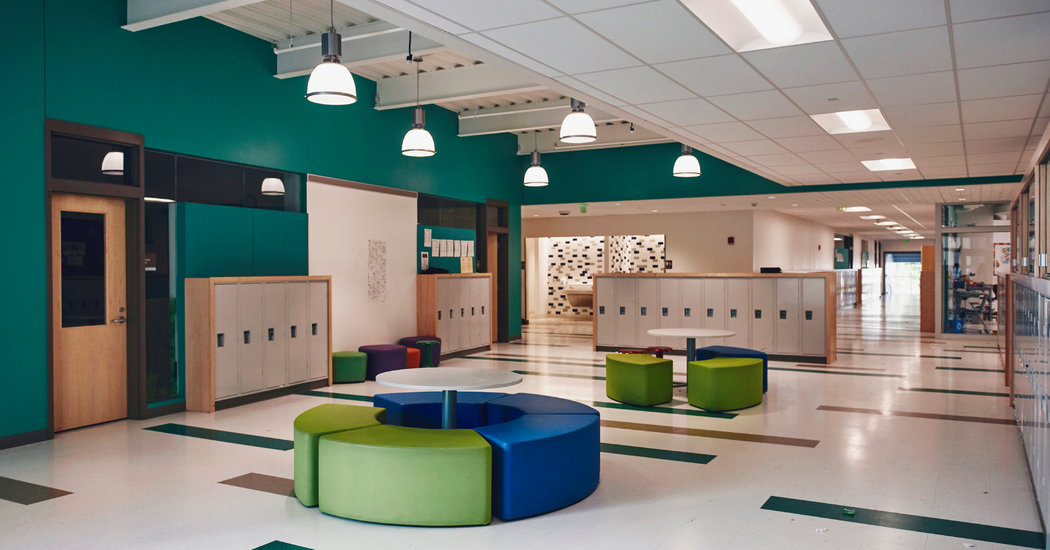 Repeated school shootings have yet to force action on gun control in Washington, but safety advocates are trying to build support for another strategy to keep children safe: smart school design.

Two bills pending in Congress would provide school districts with more information about safe school design, as well as money to pay for design services.

As districts focus more intently on safety, some architects are pushing back against a rush to load up schools with security equipment by promoting community over technology.

“The security industry is growing quickly, and they’re taking advantage of the fears of administrators and parents, selling them things that they’re promising will keep kids safe,” said Jenine Kotob, an architectural designer with Hord Coplan Macht in Alexandria, Va. who became committed to safe school design after a close friend died in the mass shooting at Virginia Tech in 2007.

Legislation introduced in the Senate last month calls for the creation of a “school safety clearinghouse” in the Department of Homeland Security that would identify and share best practices on school building design for security and safety.

The bill is supported by the American Institute of Architects, a professional organization. The institute is also backing a House bill that would make federal grant money available to school districts through the Stop School Violence Program that could be used for architecture and design services, rather than just security equipment like cameras and metal detectors.

A central repository for “unbiased information” on safe school design is urgently needed by local and state school officials, said Jim Brewer, the organization’s managing director of government affairs and policy. “We don’t want them to just be Googling,” he said.

One of the greatest concerns among school officials is “their inability to easily sift through the multitude of security options, equipment, technologies” available to them, according to a report released last year by a federal commission on school safety that was convened after the mass shooting at Marjory Stoneman Douglas High School in Parkland, Fla.

Architects can help school districts find a more “holistic” solution that gives priority to creating a great learning environment, as opposed to a barricade approach, said Jay Brotman, the managing partner at Svigals and Partners, an architecture firm based in New Haven, Conn. The firm designed the new Sandy Hook Elementary School in Newtown, Conn., after the mass shooting there in 2012.

“Instead of hardening, you can create protective layers so kids can still feel connected to the nature outside and to their communities,” he said. “You don’t want them to feel isolated — isolation is the cause of some of these terrible things that have happened.”

But the idea that the country would begin cataloging the school design strategies best suited to keeping out shooters without also tightening access to guns does not sit well with some. Senator Chris Murphy, Democrat of Connecticut and a vocal advocate of stiffer gun control measures since the Newtown shootings, suggested in an emailed statement that he was not ready to support the clearinghouse measure.

“Let’s be honest — the most important thing we can do to address the problem of gun violence in our communities is to strengthen our gun laws,” Mr. Murphy said. “Let’s start there.”

Mr. Brotman acknowledged that there were similar sentiments within the American Institute of Architects. But he said that schools built around a set of established principles known as Crime Prevention Through Environmental Design would protect children better from a host of threats, including bullying and gang violence.

These design principles call for buildings that allow those inside to see the outside surroundings easily; tight control of access, starting at the perimeter of the property and moving inward; and transparency within the building.

At the new Sandy Hook school, which opened in 2016, a rain garden across the front creates a natural barrier between the building and the parking lot. The garden area serves as a filter for rainwater runoff from the roof. But it also requires visitors to the school to cross one of three bridges to enter, limiting entry points and giving staff members a clear view of who is coming in, Mr. Brotman said.

The ground around the building slopes away. That allows the classroom windows to be low enough for children to see out while still being high above the ground.

The school has plenty of security equipment as well, like cameras and automatic lockdown capability. But the focus was on creating “a fabulous learning environment for the children,” while keeping the security technology as unobtrusive as possible, Mr. Brotman said.

JCJ Architecture, with offices in seven states, emphasized good visibility and openness in its design of the Hunking Middle School in Haverhill, Mass., said James E. LaPosta Jr., a principal and chief architectural officer at the firm.

Opened in 2016, the school has wide, naturally lit hallways that are open to view from classroom windows and glass-walled gathering spaces. Collaborative study areas in some hallways add more of a sense of activity, reducing opportunities for bullying, Mr. LaPosta said.

“It ensures that adults have visibility in all areas,” he said. “But there are still places of refuge.”

For example, lockers are positioned on the outside of classroom walls to provide a shield behind which students can hide if necessary and not be seen from the hallway. Doors connecting classrooms provide another way out of the rooms.

Michael Pinto, a principal in the Los Angeles office of NAC Architecture, said he had become a “reluctant expert” in such design practices because he had seen communities overreact and sacrifice proven design strategies for effective learning in a rush to address safety concerns.

“We want to make sure the safety discussion doesn’t overwhelm the other things we have to think about,” he said.

Yet research into the effectiveness of design as a way to prevent crime in schools is scarce, aside from a few studies that found that the approach had made students feel safer on college campuses, said Auzeen Shariati, an assistant professor of criminal justice at St. Joseph’s College in Patchogue, N.Y.

Ms. Kotob of Hord Coplan Macht acknowledged that there was not much empirical data to back up the effectiveness of the design principles in schools but said studies were being conducted.

Her firm just finished designing a student life center at the Stone Ridge School of the Sacred Heart, a private girls school in Bethesda, Md. The designers sought ideas from a security task force of parents and administrators, who suggested changes like moving an outdoor dining terrace away from the street and behind a landscaped buffer zone.

The building will have hardened glass in the main vestibule to prevent anyone from breaking through. Glass will also be used strategically throughout the building to give teachers high visibility, she said. Classrooms are designed to have “blind spots” where students can hide from the hallway.

Some school safety advocates seek to push the discussion further.

Communities should not limit discussions about school safety to the physical structure of the building, said Deborah Temkin, a senior program area director specializing in school health and climate at Child Trends, a research organization in Bethesda, Md.

Often, the threat to safety comes from within, and a student walking the halls everyday who wants to commit an act of violence can figure out where the blind spots are, she said.

“What we know works is building a community where there is mutual trust,” she said. “Open lines of communication, mechanisms to engage with teachers in multiple ways, making sure at least one adult is connected to every single student in some way. It all has to be integrated.”