A Couple Trades Up in the Financial District. Which Apartment Did They Choose? 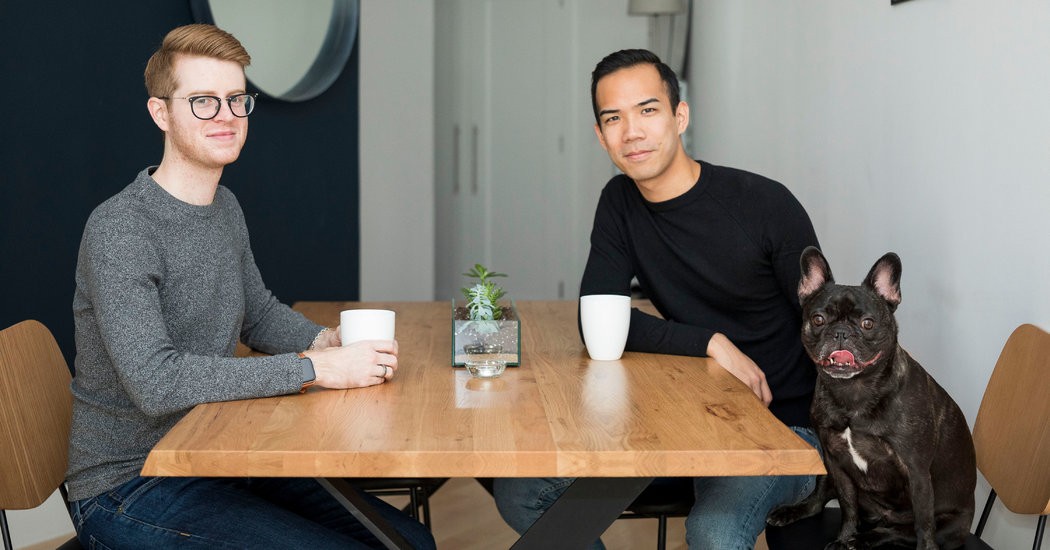 Alex Wong and Michael Thomas were renting a small, dark one-bedroom in a Crown Heights walk-up when they realized about two years ago how much they needed to move. They were paying just under $2,000 a month and sharing the space with their French bulldog, Pepper.

Mr. Thomas commuted to his TriBeCa office, where he works on inventory management for a clothing retailer. Mr. Wong is a viola player, and for a while when he was away on a long national tour, “it was just me and the dog,” Mr. Thomas said. But “when Alex got back, it was a shocker.”

Their home felt more cramped than ever. The couple, both 26, who married last fall, would shimmy past each other in the narrow hallway, which they called “the bowling lane.” They would bump into each other in the tiny corner kitchen.

“Almost anything would have been a step up,” he said.

They also worried about the stairs up to their third-floor apartment for Pepper, whose breed is prone to breathing issues. “Pepper, she is going to have a lot of problems in the future,” Mr. Thomas said. “She is not set up for success.”

[Did you recently buy or rent a home in the New York metro area? We want to hear from you. Email: [email protected]]

So they contacted Joel E. Moss, an associate broker at Warburg Realty who was referred by an acquaintance, for help buying a sunny one-bedroom in an elevator building. The couple quickly found a 600-square-foot condo unit for $665,000 in a nearby boutique building that was under construction. It had something unexpected and welcome — its own washer-dryer.

Ms. Moss warned them about the likelihood of delays in new developments. So they waited.

And waited. “A year is a long time to sit and watch what apartments show up on StreetEasy,” Mr. Wong said. “Every day we would walk the dog and go past the apartment we were supposed to be living in. It was dark and empty and there was caution tape, and it was depressing.”

Because the offering plan was not declared effective by the designated date, Ms. Moss said, they were able to cancel the contract and recoup their 10 percent deposit.

“It was such an awful process, we didn’t want to follow through with it,” Mr. Wong said.

They had also begun to feel that Crown Heights wasn’t the right neighborhood for them — an in-between area that was neither suburb nor city. So last spring they decided to hunt in their old stomping grounds, the financial district, where they had lived while students at New York University. The housing stock included relatively new apartments in renovated former office buildings. They figured they could find an even larger one-bedroom there.

The couple wasn’t interested in amenities, though most buildings came with at least a gym and a roof deck. Their budget, with help from family, ranged up to $900,000.

This corner one-bedroom, in a former commercial building from 1908, had just over 700 square feet, with an open kitchen and private outdoor space on the roof.

This triangular-shaped one-bedroom in a building from the 1930s had nearly 800 freshly renovated square feet, with high ceilings and plenty of sunlight.

This 700-square-foot unit with an open plan was in a 1931 building converted just three years ago, with recessed lighting and a walk-in bedroom closet.

Find out what happened next by answering these two questions: