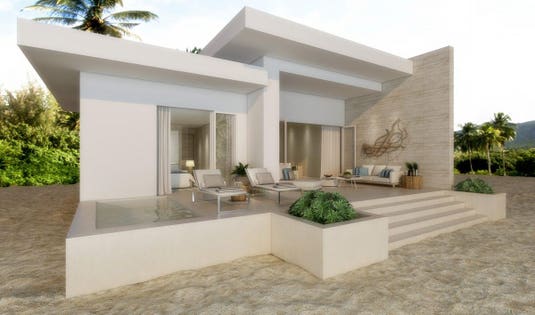 According to a recent Knight Frank report, branded residences are proliferating from the Caribbean all the way to China. But especially in the Caribbean. The report concludes ultra-high-net-worth buyers are drawn to quality home design, high living standards, inclusive management as well as luxury services and amenities.

The Beach Villas will feature eight residences priced at $1.3 million.

Alaia Belize will include three-bedroom freestanding homes along the Caribbean Sea.

“We are now seeing branded residences transform the fishing village into a luxury destination, all without losing its laid-back and corky personality,” says Caribbean developer Andrew Ashcroft, managing principal of Alaia Belize.

Ashcroft is collaborating with Marriott International’s Autograph Collection to launch the eight designer oceanfront villas featuring interiors by award-winning Brazilian designer Debora Aguiar, who is known for her eco-luxury aesthetics.

Alaia Belize recently unveiled renderings of these villas, based on Aguilar’s design. They will feature three-bedroom freestanding homes with personal entrances along the Caribbean Sea—offering solitude and luxury as owners indulge in their own private pools and beach loungers amid natural surroundings.

Aguiar’s design infuses Belize’s sense of intimacy, hospitality and sensuality into the villas.

“For the oceanfront villas, we are creating a climate of intimacy, hospitality, sensuality and bringing the personality of Belize into the concept,” says Aguiar, founder and owner of Debora Aguiar Arquitetos.

Owners can opt their condos or villas into a rental program booked through Marriott International’s reservation system.

Alaia Belize will span 20-plus acres, with a hotel, condos and
beachfront villas

Owners who don’t live full time in Belize can opt their condos or villas into a rental program booked through Marriott International’s reservation system. Ashcroft says Belize is experiencing a renaissance from international buyers, as airlines added direct flights from Houston, Toronto, Denver and Mexico City.

The Alaia Belize hotel will include a suspended rooftop pool and lounge.

The hotel will include a suspended rooftop pool and lounge, beach club, full-service spa, fitness center, art gallery, wine club, casual and formal dining, an adventure concierge, and a sailing and water club—all located one mile from the world’s second largest barrier reef. That reef, called “The Great Blue Hole,” is a giant off-coast sinkhole which Jacques Cousteau once considered one of the world’s top five scuba diving sites.

“Alaia was designed as an ‘eco-luxury’ hotel, where nature was determinant in our choices—whether natural materials; various textures of fibers, stones, woods, fabrics; or reuse of stones, woods and coatings in general,” said Aguiar. “Special areas are designed to stimulate the five senses—from the reception to the lobby, from the apartment to the circulations, and from the beach bar to the spa.”