The Benefits Of Investing In Monthly-Paying REITs 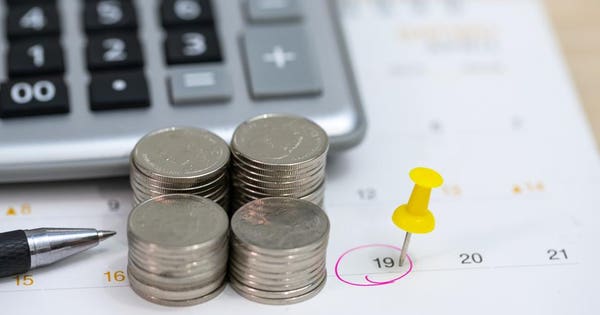 Accountant verify and check Due date for payment Expense and Vendor of financial Business ,Bookkeeping,Calendar with money

I’m a big advocate of shareholders reinvesting their dividends. It’s a great way to build up your portfolio’s potential, along with your retirement’s exact degree and style of enjoyment.

There are two aspects to dividend reinvesting that make it the worthwhile practice that it is. For starters, there’s the concept of saving up for a rainy day: setting money aside that you don’t need now for something bigger, better, and probably more necessary.

I know it’s difficult to exist in a society where keeping up with the Joneses is put on such a pedestal. You don’t have to be a rag-mag connoisseur to know what the various celebrities are sporting these days via apparel, accessories, and fast and shiny cars.

You might not know each star and starlet’s exact income levels, but you at least have a good idea of what these flashy individuals make. And what they make is almost certainly more than you do. It’s hard not to conclude that when their images are splashed everywhere in random ads and stories across the internet, in the grocery store check-out aisle and all over the TV.

“So and So Is Wearing Such and Such.”

“6 Hollywood Vacation Spots You Can’t Afford but Should Check Out Anyway!”

It’s okay to admit if you find yourself envious every once in a while. Or more.

If You Don’t Got It, Save

Yet those sharp clothes and shiny rims and insanely luxurious getaways are fleeting commodities.

But, as we’ve already established, that’s them. Chances are it’s not you. So it’s best to put some blinders on in this regard and focus on the future. Don’t be like the “too many people” in that Will Rogers’ quote we’re all sick of hearing by now:

“Too many people spend money they haven’t earned to buy things they don’t want to impress people that they don’t like.”

Whatever non-necessity purchase might feel like it’s worth it in the moment; but you won’t be thinking that same way the next time a rainy day comes around.

The Power of Compounding

So that’s the first aspect of why dividends are such valuable resources.

They give you extra money to put toward your savings goals, whether those goals are short-term to help fund your 14-year-old kid’s upcoming college degree… mid-term like accruing enough money to make a sizable down payment on a new house in 10 years… or long-term like the retirement cushion we’ve already discussed.

Now here’s the second part of this worthwhile equation: By being one of those thrifty shareholders who reinvest their dividends, you’re not just saving money. You’re making money as well.

And, sometimes, you’re making quite a bit.

These are hardly instant millions we’re talking about. Please don’t misunderstand me. You’re not playing the lottery here.

However, depending on how much you’re investing in the first place, you could make extra thousands or tens of thousands – maybe even more – over time. This is the power of compounding at work.

The Song That Never Ends

At its most basic, compounding is the passive act of making more money off of money you’ve already made. For that matter, at its most complicated, compounding isn’t much more difficult to understand.

Like “The Song That Never Ends, it’s a continuous cycle until you get sick of it.

Unlike “The Song That Never Ends,” I don’t really think you will.

If anything, I think you’ll want more of it. The more wisely saved money, the better. Right?

That’s why I like the concept of monthly paying dividend stocks so much more than the quarterly paying examples Americans like me are most familiar with. More frequent payments mean more opportunities to compound at a faster rate.

That’s a good thing stacked on top of another good thing that I, for one, don’t want to ignore.

The only problem with monthly paying dividend stocks as a whole is that there aren’t enough of them. This includes the ones in my exact area of expertise: real estate investment trusts.

Canada has them aplenty. That’s actually the norm for their REITs; and, in this regard, I wish the U.S. would take a page out of its northerly neighbor’s playbook. Monthly dividends aren’t difficult to switch over to, and they benefit retirement-focused folks every bit as much as those who’ve already retired.

If there’s a collective downside to the notion, don’t ask me. I’d much rather spend the rest of this article filling you in on the select few U.S. REITs that do make the monthly cut. Naturally, I’ve narrowed the small list down further still by assessing their fundamentals.

The stocks down below are solid. And so are their dividends – all 12 of them per year.

As you can see, we like Apple Hospitality (APLE), Chatham Lodging (CLDT), EPR Properties (EPR), Gladstone Land  (LAND), LTC Properties (LTC), Realty Income (O), and STAG Industrial. There are other monthly-paying REITs, but they aren’t one’s we would recommend today.

Also, there are only three that we would actually BUY today, based on valuation: APLE, LAND, and LTC. We recommend waiting on a pullback before buying CLDT, O, and STAG.