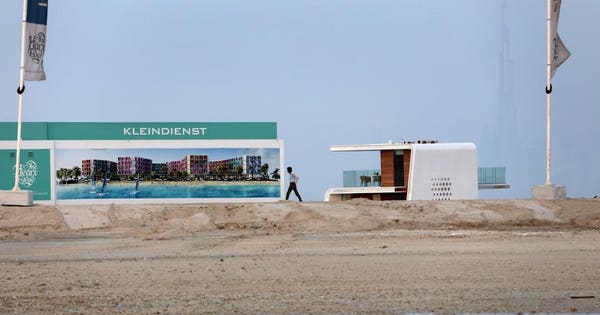 Buyers of expensive properties are used to having a little perk thrown into the deal. Most would expect a decent bottle of something. Some even get an expensive car. But buyers of the Heart of Europe, a new development in Dubai, can receive real citizenship to a European country with their purchase.

The Kleindienst Group, which is building luxury homes on some Europe-shaped artificial islands off Dubai’s coast, is offering their new owners a Moldovan passport with their purchase.

Moldova is not part of the European Union, but it does have access to its passport-free Schengen area, meaning an owner of the Dubai property could travel visa-free to any of the 26 countries included in Schengen, plus another 49 countries around the world.

Another perk for these luxury property buyers is they never actually have to go to Moldova. The small European country recently rolled out a Citizenship By Investment (C.I.B.) scheme, meaning that anybody who pays €100,000 ($113,120) plus €35,000 in fees ($39,591) and passes the necessary diligence checks, can become a citizen of Moldova.

While Moldova’s citizenship scheme is not unique – wealthy investors can choose from four European C.B.I. programs – it has raised serious concerns.

The European Union is already attempting to clamp down on schemes selling citizenships for investment. In January, the European Commission said “money laundering and corruption and tax evasion” where the biggest risks associated with investor citizenship schemes.

The Commission has issue with those such as Moldova’s, which is not only one of the cheapest on offer but can also be purchased without having set foot in the country. It points out that principles laid out in international law require the existence of a “genuine link” between the applicant and the country.

Others are also concerned: “The OECD [Organisation for Economic Co-operation and Development] has been working tirelessly to increase due diligence to avoid money laundering and tax evasion on the GV programs, which seem to have proliferated in Europe,” says Patricia Casaburi, director of Global Citizenship Solutions, which advices on C.B.Is.

On its part, the citizenship scheme is good money for Moldova, which is not only one of Europe’s poorest countries but has one of its fastest declining populations.

Moldova might be unlikely to appeal to many millionaires seeking seaside homes, but Dubai is also struggling. According to Knight Frank, a real estate consultancy, luxury residential property prices in Dubai fell by 3.4% last year. Developers, therefore, need to offer any perks they can.

The Kleindienst Group is not the first in the country to offer its buyers passports, however. The fashion came into being in 2015 when one innovative property developer in Ajman (one of the U.A.E’s seven Emirates) started offering its clients citizenships to Antigua and Barbuda, a Caribbean nation.

“We are expecting nationalities such as Pakistanis, Iranians, Syrians and Afghanis and other nationalities as well to make use of this offer”, said Ajman Uptown’s CEO at the time.

An artists image of the Floating Seahorses, part of The Heart of Europe development. (AP Photo/Kamran Jebreili)

Since the Ajman experiment, developers in the region have noticed a surge of wealthy Middle Easterners hankering European citizenships. Josef Kleindienst, Kleindienst Group’s chairman, told The Times that “hundreds” had expressed an interest in buying into the project, with the majority coming from Syria, Iraq, Saudi Arabia and China.

The European Commission has also noted that C.B.Is mostly attract wealthy investors from Russia, China, Turkey, the Middle East, and Central Asian countries, according to a report earlier this year.

Chinese investors are in a particular hurry to get a second citizenship. The number of Chinese millionaires coming to the U.K. has gone up by nearly 50%, recent figures show.

With prices starting from £1 million ($1.2 million) a property in The Heart of Europe might be more expensive than buying a Moldovan passport on its own, but at least it comes with a bolt-hole in Gulf. With Europe cracking down on investment citizenships that might come in handy.