Macy’s Is Building a What on Top of What? 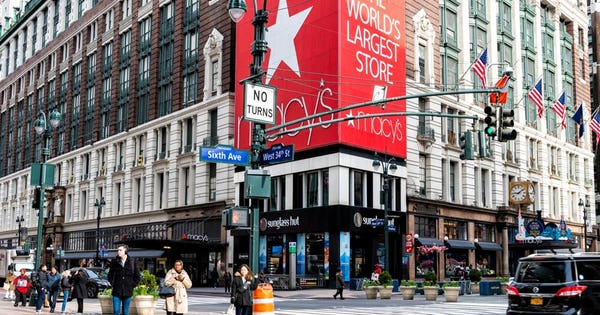 Macy’s Inc. (M) might not be a mall, but the retailer seems to be thinking like one nonetheless.

As the e-commerce world keeps changing, malls and the real estate investment trusts – more commonly “acronymed” to REITs – that own them have had to get creative in turning a profit. Forget the old tricks and tactics they previously relied on to drive traffic inward, upward and onward. Those were 20th-century strategies.

And we are definitely in the 21st today.

The retail wheel has already been invented. So, today, it’s all about reimagining. Pushing the envelope. Thinking outside the box.

However you want to say it, mall REITs are doing it these days. They’re no longer just for clothes and Christmas shopping with some snacking options thrown in for good measure. The ones most likely to make it have renovation and revenue plans that they’re already putting into action.

As I explained on Seeking Alpha in early May:

The mall of the future is going to be an upgrade from the hodgepodge bunch of clothing shops and food courts we know today. We want to see these landlords adding office space, apartment complexes, gyms, and hotels…

To be sure, the best of the best are, with positive results proving that this strategy works. Simon Property Group (SPG), for one, recently raised its dividend, a sure sign of stability. And Macerich (MAC) Executive Vice President of Leasing Doug Healy says his company is maintaining a bullish outlook “on retail in both the Class-A mall sector and in bricks-and-mortar stores.”

True, that was before the latest round of store closures were announced. But it was well after the much bigger debacles of 2018. Any mall that can come out of that mess with a smile on its face is retail worth noticing.

Macy’s Is Looking Up – Literally

For that matter, Macy’s doesn’t just agree. It wants in on the action, as evidenced by the news that’s once again making the retail rounds.

Apparently, it’s considering its own set of innovative plans – strongly enough to take that talk out of the boardroom and out to the public. While there’s nothing signed, sealed, and delivered at this point, CEO Jeff Gennette has come out and said that yes, the famed yet struggling company really is thinking about it…

With “it” being the idea of setting a skyscraper atop its flagship store in New York City. The one in Manhattan at 151 West 34th Street.

The tower would take up a whopping 1.2 million square feet from top to bottom, according to National Real Estate Investor. And this would be opened up as office space to outside businesses, bringing in much-needed income.

So how far along is this idea on the drawing board? I’ll let Gennette answer that question directly. Here’s what he had to say on the Macy’s Q4-18 earnings conference call in February:

Over the last year and a half, we have been working closely with the team of land use development and design experts to produce a menu of economically viable redevelopment alternatives. These could densify the real estate with complementary uses and we’ll certainly preserve the store and enhance the customer experience.

He expects to “be able to provide more detail later in the year as the Herald Square plan develops” and they “get the necessary feedback from everyone involved.”

Again, that was back in February. Yet, like National Real Estate Investor, the community-oriented website Patch – the Midtown Manhattan-specific segment – also brought it up again this month. This new coverage about “old news” seems to strongly signify that plans are progressing as expected.

So what do we think here? Can Macy’s make it?

Can it reinvent itself like the malls it calls home in so many towns and cities across the United States?

As you may already know, the company’s first-quarter earnings were a perceived mixed bag, beating analysts’ expectations when it came to same-store sales. Which, of course, is always a positive. We’re certainly not going to object to that.

In short, Macy’s has been working hard to boost its image and income. And it shows in that regard.

Considering the headwinds the entire bricks and mortar-based retail range is facing, it’s also impressive how it came so close to matching expected revenue. Analysts were predicting $5.505 billion, and Macy’s nearly did it, coming in at $5.504 billion instead.

As such, we’re quite confident it’s not going to fall apart in the near-term.

I own shares in SPG.