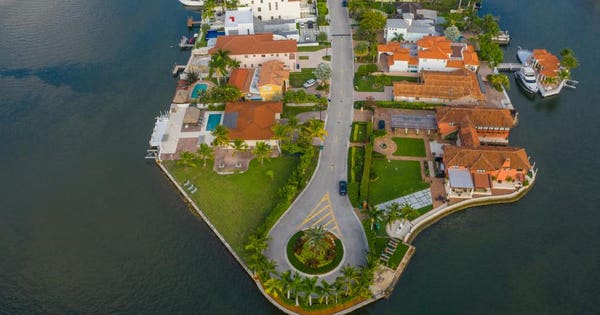 Luxury Miami homes on an island

It’s been more than six months since the U.S. Treasury’s money laundering enforcement arm expanded ownership disclosure requirements for all cash real estate deals in South Florida to include any transactions of $300,000 or more. For the first time, the Financial Crimes Enforcement Network also cast the net beyond Miami-Dade to also cover sales in Broward and Palm Beach counties as part of a nationwide expansion of the program requiring title companies to devulge the identifies of individuals behind shell companies buying luxury real estate properties.

FinCEN’s goal is to flush out foreign buyers using illicit monies to purchase homes through untraceable corporate entities. Enacted in 2016, the initial “Geographic Targeting Order” only covered all cash deals of $1 million or more in Miami-Dade and $3 million or more in Manhattan. During the six-month inquiry, more than 25% of the cash transactions involved a “beneficial owner” who is the subject of a “suspicious activity report.”

While the order proved fruitful for federal authorities chasing criminal money launderers, the expansion of the program covering deals at lower price points across more geographic regions is impacting wealthy buyers who are dealing honestly and don’t have issues disclosing the source of their funds, according to local real estate experts.

The targeting order had a dramatic impact in the Miami real estate market three years ago. According to sales data compiled by the Miami Association of Realtors, cash deals represented 54.9% of Miami’s total closed sales in November 2015, two months before the initial order went into effect. In November 2016, cash sales declined to 42.1% of Miami’s total closed deals. Now, cash deals represent a third of all real estate closing in South Florida.

In Miami-Dade, cash deals represented between 35% to 39% of all closings from November through March, according to the realtor’s association’s monthly reports for the past six months. During the same period, cash deals accounted for 38% to 41% of all closings in Broward. In Palm Beach, 43% to 49% of total closings were done with all cash. By comparison, the national average for all cash deals is 20%, according to the realtor’s association data.

Mike Pappas, president and CEO of real estate brokerage Keyes Company, said an influx of buyers from the American Northeast and Midwest, and some from California, are buying homestead properties in Florida to take advantage of the state’s tax-friendly environment. Wealthy American buyers are lessening the impact of the geographic targeting order that has scared away some foreign investors, who typically make up the lion’s share of all cash buyers of South Florida real estate, Pappas explained.

“That is good, clean money buying real estate in Florida because the state is a tax haven,” Pappas said. “These are legitimate people who are not hiding anything and are okay with piercing the veil. Although, I think they would rather not have to.”

Jeff Morr, a luxury residential broker who leads the Douglas Elliman Rubin and Morr team, said South Florida all cash deals will continue to outpace the rest of the country because the market is already an economy that relies on hard money. “We are getting a lot of cash buyers from California, Chicago, New jersey and Boston,” he said. “Your homestead is a great place to have your cash. It is protected there.”

Morr adds that financing for big ticket condos and single family homes in Miami Beach and surrounding coastal cities like Surfside and Bal Harbour is hard to come by. “We are talking multi-million dollar luxury properties that require a lot of cash,” Morr said. “We have a lot of wealth in Miami than other cities so we will have higher cash deal ratios. The assumption was that more than half of cash buyers in Miami were criminals. That is not the case. They are people who have legitimate money and are not afraid to disclose anything.”

It’s difficult to get a mortgage on a luxury condo, according to Pappas. “Condo deals have tremendous restrictions,” he said. “In most cases, you need to put down 20% to be considered for financing. It is more likely for a buyer to use cash to get the deal done and maybe refinance it later.”