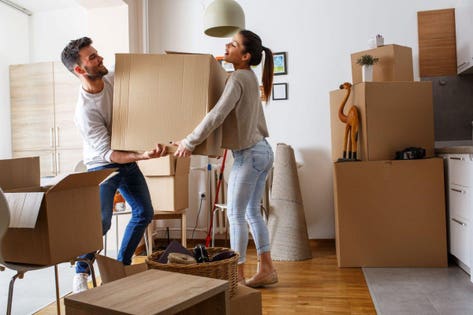 For generations, the bright lights and big opportunities of major urban centers have lured potential first-time home buyers looking for the right place to settle down. But lately, there has been a considerable shift in young home buyers flocking to areas with affordable living conditions, plentiful job openings and good wages, according to a new report by the National Association of Realtors.

The study analyzed employment gains, population trends, income levels and housing conditions in the largest 100 metropolitan statistical areas across the country to identify the most popular areas for Millennials. The top five metro areas for Millennials were selected because of their high share of both current Millennial residents and recent movers, as well as their favorable employment opportunities. Millennials in the study are those born between 1980 and 1998.

Madison, Wisconsin: Madison is the top destination for Millennials where 75 five percent of recent movers to this capital city west of Milwaukee were Millennials. Thirty-two percent of Madison’s population is comprised of Millennials.

Lawrence Yun, chief economist for the National Association of Realtors, says Madison has many attributes that appeal to Millennials, including earning potential. As of 2017, the median income for Millennials in Madison was $62,000, and $68,500 for Millennials who had recently moved to the city.

“In comparison to other areas, Madison offers one of the highest wages for Millennials,” says Yun. “This income level combined with the robust employment opportunities and the affordability, make Madison among one of the most appealing locations for Millennials who are looking to stay longer and raise families.”

Grand Rapids, Michigan: Seventy-three percent of the recent movers to Grand Rapids were Millennials, adding to an already large population where 27 percent are Millennials. The second-largest city in Michigan is a more affordable area than most in the region with strong employment growth. Young home buyers earn about $53,000, while they can afford to buy 22 percent of the homes currently listed for sale in the area.

Seattle: The tech hub has seen a large number of Millennials residing (29%) and moving (70%) into the area. Employment continues to grow faster than most of the largest metro areas because several major companies are in the area such as Amazon, Microsoft and Boeing. Millennials who recently moved to the area earn a median income of $70,000, but they can afford to buy only 5 percent of homes currently listed for sale in this pricey housing market.

Durham, North Carolina: Alongside Raleigh and Chapel Hill, Durham is home to some of the largest and most successful research parks, helping to boost the employment rate. Sixty-eight percent of those who moved into the area were Millennials, and this age cohort accounts for about 29 percent of Durham’s total Millennial population. The median income for Millennials who moved here recently was $50,000.

Omaha, Nebraska: About 67 percent of recent movers in Omaha were Millennials, while 28 percent of the total population is Millennials. Most jobs in Omaha are related to health care and social assistance. Education is another strong and expanding career field in the area. Omaha’s multiple higher education institutions attract young professionals who decide to stay and raise their families. The median income for Millennial movers was $51,500, and the unemployment rate in the area is lower than 3 percent.