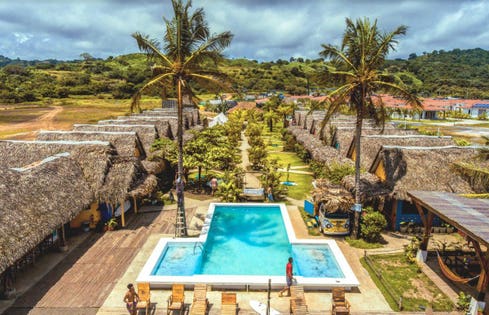 The explosive growth within hospitality startups has seen another boost this week with the announcement of $100 million raised for Selina—the “experiential hospitality” startup that operates similar to the online Airbnb model, but with a greater emphasis on finding unused buildings in interesting locations and adapting them for short-term stays or co-working spaces. They also have an increased emphasis on partnering with local artisans and guides to create experiences for guests.

Last year Selina secured $95 million in funding from the Abraaj Group and WeWork founder Adam Neumann. When combined with the latest round, largely from Access Industries with additional contributions from Grupo Wiese and their existing investor Colony Latam Partners, the total amount raised so far totals $225 million.

Canopy tours are one of the cultural excursions available via Selina.

The company launched in 2015 and came up with name Selina as a moniker that represents a fictional millennial nomad-like traveler whom company cofounder Rafi Museri describes as “honest, humble, beautiful. She hosts you, she hugs you. You want to be with her.” The branding seems to have worked well with operations in 46 locations in Latin America and Europe so far and an expansion rate of approximately one property per week.

The investment in bricks-and-mortar assets differentiates the company from the Airbnb model in that they actually have some ownerships rights over much of their inventory. Their model, however, is designed to keep the property bloat to a minimum. As Yoav Gery, president of Selina, explained via follow-up email, “Selina has executed partnerships with real estate and private equity funds and investors in specific markets, who have committed to acquire and lease real estate in those markets and to fund Selina’s conversion and transaction costs with respect to that real estate—so that Selina’s growth into such markets is truly asset light. To date, Selina has executed such partnerships with investors who have committed in excess of $300 million to fund acquisition, conversion and transactional costs and we are in advanced negotiations for an additional $200 million of such funding.”

While it is “asset-light,” the additional $300 million, with another $200 million close to becoming a reality, gets this startup closer to potentially having $1 billion worth of assets at its fingertips, possibly putting it within unicorn range—a startup valued at $1 billion or more (here is Forbes‘ latest list of the next billion-dollar startups). The challenge for this model is in identifying neglected properties in desirable locations, turning them in to places people would pay to stay and coming up with local cultural experiences that will attract travelers, particularly the young ‘nomads’ they are trying to attract.

“To identify locations, we leverage technology and an in-house real estate team to seek out the most interesting properties in emerging—sometimes unexpected—locations and then work with regional partners to secure the buildings either through purchase or lease,” said Gery. “We then sign a long term (20-40 year) lease to operate as a Selina. Often, these properties are no longer relevant and underperforming, and we combine design, technology and experiential content and programming to convert them to relevant properties for millennials and digital nomads.”

Having a stake in the real estate can make the locations all the more expensive to run, but it holds deep potential for much larger profit margins if those properties gain in equity over the 20 to 40 years. Selina’s very presence in these towns could be the same factor that drives up the value of the properties, by bringing tourist income and increased attention to the locations. In contrast to Airbnb, which owns nothing tangible, this model has the potential to be its own profit driver by creating a demand that didn’t exist and then selling a core asset once the demand has increased enough to make their initial investment seem minimal.

It seems the old-fashioned real estate model is the latest game changer for investing in hospitality startups.