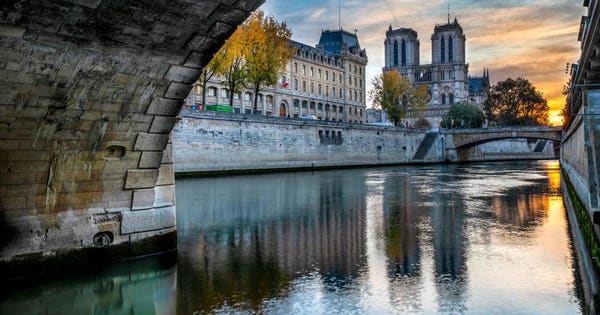 The ashes of Notre-Dame de Paris had barely cooled before President Emmanuel Macron pledged that the cathedral would be rebuilt within five years. Billionaires rushed to promise financial help. An international architectural competition will determine the design of the rebuild; experts and non-experts are already weighing in on whether the steeple should be reconstructed exactly as it was, or whether it should reflect contemporary times. It promises to be a lively debate.

Architectural historian Min Kyung Lee, Assistant Professor of Growth and Structure of Cities at Bryn Mawr, has studied the structure and the history of Notre-Dame. She points out that, while the restoration question seems simple, the building and the site are very complicated.

“It’s not just about restoring a medieval building,” she points out. “The spire that fell is a product of the mid-19thcentury, when architect Eugène-Emmanuel Viollet-le-Duc worked on the building. In fact,” she adds, “The building has been under constant renovation, with things removed, like gargoyles, or things added, like the steeple.”

In the 16th century, both the Huguenots and the French king vandalized and altered the cathedral. Features on the exterior were removed because they were deemed idolatrous, and tombs and stained glass windows were destroyed in the name of modernization. During the French Revolution of the 1790s, Notre-Dame was converted into a storage warehouse for food, and the heads of many of its statues were removed, especially statues of French kings. By the end of the 18thcentury, the building was neglected and decaying.

The 1831 publication of Victor Hugo’s bestselling book, “The Hunchback of Notre-Dame” turned the building’s fortunes around and led to a series of renovations, including Viollet-le-Duc’s.

William Morgan is an architectural historian and writer who studied medieval buildings for his doctoral dissertation.

“My main concern about Notre-Dame, or any monument of that importance, is that it could be overly fussed with.

“There’s a danger in what one might call the Williamsburg or too-pretty (or even New Urbanism) approach.”

Min Lee points out that most of our assumptions about Notre-Dame today are the result of later interventions.

“The way we see the façade, with a lot of space around it, is the result of the modernization of Paris during the last half of the 19thcentury. Until then, it was surrounded by buildings,” she says.

“During the renovation of Paris, medieval neighborhoods were razed to make way for wide boulevards, and modern iron and glass buildings were erected. At that time of great growth, an appreciation of history created plazas around Notre-Dame to make it visible.”

She believes that the planned restoration can be an opportunity.

“Notre-Dame is an artifact of a collective history. How is this monument going to reflect current France?”

William Morgan puts it this way: “Notre-Dame cannot and should not be re-built exactly as it was the day before the fire. Stabilize what is there, make it stronger, safer. And add, where needed, contemporary materials. It should be bold, not timid, but respectful of the past without being pseudo-Gothic trite. Eschew the cute.”