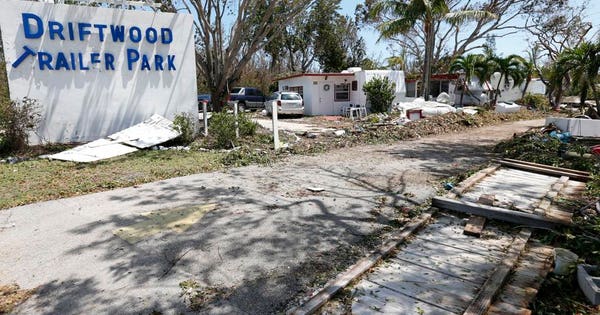 The entrance to the Driftwood Trailer Park is shown, Tuesday, Sept. 12, 2017, in Tavernier, Fla., in the Florida Keys. (AP Photo/Wilfredo Lee)

Warren Buffett’s company Clayton Homes, the biggest mobile home manufacturer in the U.S. has continued to profit from high interest rate loans. The Oracle of Omaha has sold low-income Americans the dream of ownership for nearly 20 years, and his investment company Berkshire Hathaway makes money on the loans, since they own the company that Clayton urges its buyers to go through. Many of the people buying these homes are minorities and have helped to fuel Clayton’s $13.7 billion mortgage portfolio.

The Breakdown You Need to Know

They have outsized dominance in the manufactured home market with a 49% share, and where profit margins are greater. Buffet’s Clayton company brought in $765 million in revenue, in 2017.

Mobile home loans are similar to car loans because they’re typically classified as personal property, instead of real estate. Interest rates can be as high as 13.5% or more, and like a vehicle, lose as much as half its value in three years. These rates make it hard for mobile-home owners to leverage equity from their purchase in order to buy a traditional home.

Families who are able to get a loan for their mobile homes generally lease the land on which it sits, a common practice in this industry that can trap people in a cycle of debt. The national monthly average to rent a space in a trailer park is around $250 and can be as high as $600. Trailer parks tend to be built in warmer climates, with Mississippi and Alabama having some of the highest rates of mobile homeownership.

If you’re thinking mobile homes are perhaps only for an older demographic you would be wrong. The majority of mobile-home residents, 23% are between the ages of 18 to 29 and have an average household income of $28,400. If that’s not alarming enough, in 2015, the average sales price for a new manufactured double-wide home was around $110,000.

There are some mobile home communities attempting to rezone trailer parks, to prevent owners from selling the land to developers that may raise the rent even higher. If residents are able to pool their resources together and buy the park, it would give them the opportunity to run it as a co-op.