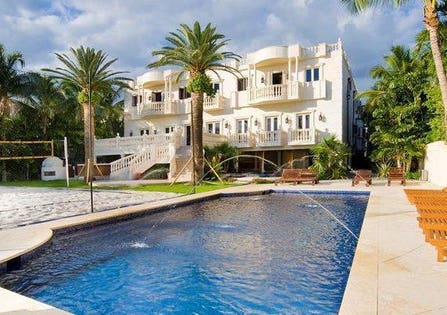 Birdman owns one of the largest homes on Palm Island, Miami.

The rapper and producer known as Birdman (aka Bryan Williams) still seeks a buyer for his secluded nearly 20,000 square foot estate on Miami’s Palm Island. Birdman had originally listed the property for $20 million and after its latest reduction it now asks $14.5 million. The seven-bedroom, 13-bathroom house underwent a major remodel in 2011 which included merging three separate bedrooms to create one massive master bedroom that is so large it needed a custom-made bed to meet the correct proportions of the space. The home boasts a recording studio, home theater, two wine cellars, two guest suites, an outdoor pizza oven, pool, jacuzzi and one hundred feet of waterfront access. The superstar record producer and artist is the co-founder of Cash Money Records and has numerous platinum-selling albums to his name along with collaborations with artists such as Drake, Nicki Minaj and Young Jeezy. As recently as 2017 he ranked fourth on Forbes’ list of highest paid hip-hop stars with an estimated net worth of $110 million. Forbes’ interview with Birdman and Slim, his brother and label co-founder, can be found here.

Palm Island, a manmade island just off the coast of Miami Beach, is only accessible by boat or the MacArthur Causeway and with only 82 acres making up the entire island it is a world away from the hustle of Miami Beach. There are only about 20 others home for sale on the island, starting around $2 million for some new construction options going up to a $28 million nine thousand square foot house with small private marina. Palm Island is more populated than the nearby Star Island, where Gloria and Emilio Estefan have a $32 million guest compound for sale.

Above is the bedroom suite measuring 3,500 square feet with its famous bed. That metallic square in the ceiling is a television that drops down and, not pictured, is a glass barrier that provides visibility into the shower room. It can be made opaque with the touch of a button. Below is the kitchen which nods to Birdman’s favorite color of red with onyx countertops that have glowing streaks of deep rouge when under low lighting conditions.

One of the entertainment rooms has a bookmatched marble bar at the far end of the room, with hexagonal floor patterns to add character to the room.

The entrance to the home has a large entry foyer with 20-foot high ceilings and a second-level balcony that surrounds the room. Made for entertaining, the space allows guests to mingle on the ground floor or walk up to the second level and take in the entertainment from a higher perch.

20-foot high ceilings in the entrance

The indoor movie theater is where Birdman would screen all his hiphop videos, according to listing agent Jeff Miller.

The entertainment options continue outside with a pool that looks out on to the open water.

One of two pools

And another pool that’s more designed for hanging out with a group of people.

Then there’s the jacuzzi, within arms reach of the pizza oven.

The volleyball court near the pool.

And the garages that line the entrance to the front door.

Two separate garages for up to four cars