A Startup Called Weezie Is Going To Make You Rethink Towels 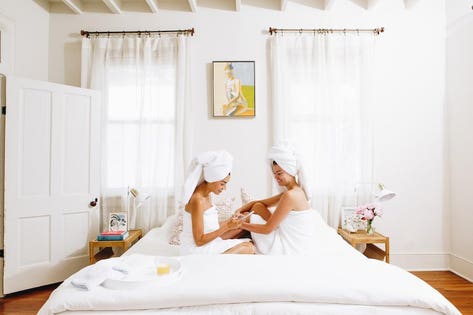 Weezie is redefining the luxury towel.Weezie

The market has been flooded with startups selling sheets, mattresses and other home furnishings, but there hasn’t been much in terms of towels. This is surprising considering most people use their towels at least once a day and new towels are the fastest and easiest way to makeover a bathroom. But a new startup founded by two women is drying off the competition.

Launched in October 2018, Weezie’s goal is to make buying luxury towels more accessible. Founders Liz Eicholz and Lindsey Johnson came up with the idea for Weezie when they both realized they didn’t like their towels and that “luxury” towels just aren’t all that luxurious. The women, who had been friends over a decade, couldn’t get this problem out of their minds. At the time, Johnson was in business school and Eicholz was a creative director at Bustle.

It turned out, as they did months of market research when developing the product and branding —they weren’t the only people who found their towels disappointing. Common complaints included towels losing their “fluffy” quality, fabric that doesn’t withstand being washed, not adequately drying the body off, or staying wet on the hook.

The women also realized that there was truly an absence in the market. “We were buying sheets from Parachute, mattresses from Casper, bras from Third Love, and glasses from Warby Parker,” says Johnson, “There was nobody focused on the towel and once we started digging into it, [we thought] towels really deserve their own company. It’s something that you use every day and when you’re not using it, it’s a design fixture in your bathroom. It deserves to be more than an afterthought.”

Before focusing on design, Eicholz and Johnson spent over a year trying to find the perfect towel. Their search brought them to a textile manufacturing convention in Germany. The women brought over a dozen towels as well as lots of ideas and questions with them. They were determined to learn about the process of manufacturing towels so they could create exactly what they were looking for.

Weezie towels are made from 100% organic long-staple cotton and are manufactured in a family owned and operated factory in Portugal. The fabric is OEKO-TEX® certified, which means the cotton has not been treated with harmful chemicals like pesticides and lead.

The “secret sauce” of Weezie towels is how the cotton is weaved. The technology traps air into every single fiber. That air pocket creates a towel that is as absorbent as it is fluffy and soft.

Another specific design choice was to have a hidden hook in the piping, which allows for more effective drying (no more mildew on the bathroom door).

The company even offers a starter pack which has four bath towels and two hand towels for 15% off retail pricing.

One of Weezie’s most popular products are the navy blue makeup towels, which come embroidered with trendy eyelids, hearts or the humorous statement “Stain Me.” These incredibly useful towels solve the problem faced by everyone who wears makeup and owns white towels.

Eichholz explained they wanted to make the “best quality towel and then it’s up to the consumer to make it their own.” Weezie’s customization options are truly elevated. There are five different monogram styles to choose from including a single initial.

One style isn’t technically a monogram at all, but rather up to twelve letters of the customer’s choice. The founders revealed this option has been particularly popular. Towels have been customized with everything from Guest to nicknames, numbers, inside jokes, and even the names of their homes. There’s also a choice of custom embroidery for the bottom edge of the towel, currently with six different colors of thread to choose from.

Popping Up In New York

In March, Weezie will launch their first retail venture, a pop-up shop on the second floor of Showfields on Bond Street in New York. This will allow customers to physically feel the product before they buy it.

While Weezie launched with a limited product line, they are expanding in the very near future. A gift registry is in the works for summer 2019. This idea is a result of customer demand. “We’ve had a lot of brides write in and ask us how they can add Weezie to their registry. So we’re going to be building our own, which is really exciting,” explained Johnson.

As a result of social media requests, Weezie will also be introducing four beach towels for the summer. These designs of these towels will be a little different than the classic whites currently available for the bath, with bright, colorful, patterns. A baby line will also be launched in the fall of 2019, which will have towels, bibs and wash clothes. Bathmats are also in the pipeline.