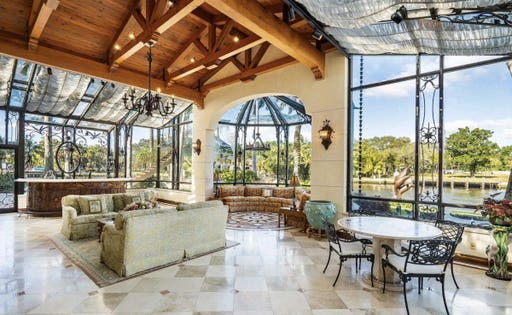 Billionaire Wayne Huizenga accomplished a lot in his lifetime. He was part owner of three sports teams—the Dolphins, Panthers and Marlins—and that was after he made it big in the world of garbage collection by starting out with one truck and then consolidating over a hundred other pickup companies to create the Waste Management refuse disposal company. Forbes estimates his estate’s worth at $2.8 billion, ranking it #859 on the 2018 Billionaires list. He also found success with expanding Blockbuster Video only to sell it to Viacom for $8.4 billion. Other major brands to his business credit include Extended Stay America, AutoNation and the cleaning services firm Swisher which he sold for $40 million.

Somehow he also found time to go all out on a 20,653-square-foot Fort Lauderdale mansion with docking space for a 135-foot mega yacht. The home still belongs to his estate (Huizenga died in March of last year) and is currently listed for $27 million with Billy Nash of The Keyes Company but will go to auction via Concierge Auctions starting March 26th through March 28th. The entire 1.41 acre estate, called Tarpon Pointe, comes with a main house and four other buildings on the property for a total of ten bedrooms and 18 bathrooms.

The home has a very hacienda-like feel with a large sunroom (above) providing views out to the 590 feet of riverfront. Here is a look at the front of the house with its bright yellow exterior and barrel tile roof for more of the Spanish style flair.

Inside there’s the impressive master bedroom that comes with dual bathrooms and closets.

One of two master bathroomsConcierge Auctions

Moving over to the communal parts of the house, the large kitchen comes with its own wood-fired pizza oven.

Here’s a full view of the kitchen in the main house. The guest house also has a kitchenette.

Outdoors the resort-style pool has a three-story pagoda-style gazebo.

For more information go to the auction page here.