The Next Park Avenue: A Look At Manhattan’s Newest Residential Corridors 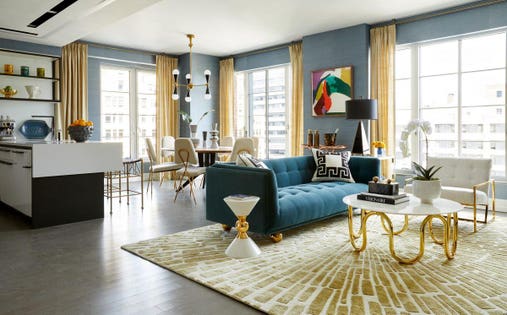 It might be hard to imagine, but Park Avenue wasn’t always one of the most popular places to live in the world. It was once simply called Fourth Avenue, and was just another passage to move up and down the island of Manhattan.

After Grand Central Terminal was built in the late nineteenth century, luxury skyscrapers began to dot the strip in midtown, offering ease of travel and immediate access to Central Park.

Today, extravagant wealth is implied with the concept of owning property on Park Avenue.

The street is the perfect example of change in New York City and its history has been repeated time and again on countless others.

And whether their longtime residents welcome it or not, the same fate is headed towards some of the city’s other lesser known thoroughfares. Here’s a look at some of the city’s formerly unassuming blocks that are poised to become as famous as Park Avenue:

A recent rezoning and Google’s decision to expand its campus to Hudson Square caught their attention, however, and now several projects are popping up. Among them are 70 Charlton, which will have 92 units in two 22-story wings, and the 170-unit, 30-story Greenwich West at 11o Charlton.

Phillip Gesue, chief development officer at for Strategic Capital, one of the developers behind Greenwich West, said that despite Charlton Street’s proximity to the shops and restaurants on Prince Street, along with the nearby Hudson River Park, it was previously undervalued.

Careful not to change the vibe of the neighborhood, the residences in Greenwich West are loft-style, reflecting SoHo’s industrial history, he said.

“This building was designed by a French design team and their whole mission was to create the French version of the classic New York loft building,” Gesue explained.

Those who spend time on the Upper West Side know that 72nd Street is its most popular strip. It has, for example, an express stop on the subway, along with entrances to Riverside and Central parks, and The Dakota, the famed former home of John Lennon.

But just below it on West 71st Street, a buzz is igniting. To take advantage of the hotbed of activity one block up, along with the theater-goers that flock to Lincoln Center, a 38-unit, seven-story condo is rising at 350 W. 71st St.

And though the building is off to the side of the otherwise busy neighborhood, its buyers are happy with that, noted Jeffrey Stockwell, a broker with Stribling & Associates, the firm managing sales for the project.

“Many of our buyers are coming to us specifically for the location because the building is located on a quiet cul-de-sac,” Stockwell said. “They understand that they can get the best of everything here – a beautiful, peaceful block that is adjacent to Zabar’s, Lincoln Center, Riverside Park, and so much more.”

Heading back downtown again, we arrive at Tribeca, a neighborhood once enclosed in a tiny triangle below Canal Street that has grown to be roughly twice the size of SoHo.

“Tribeca is one of the most coveted residential neighborhoods for people seeking access to the very best the city has to offer,” noted Marty Burger, CEO of the development firm Silverstein Properties.

“Not only is it one of the city’s most desirable places to live for those who work Downtown with its unparalleled access to transportation, the area is home to an amazing culinary scene, as well as all types of retail and fitness offerings,” he said.

Having to work around a whopping five landmark districts makes building new developments in Tribeca tricky, but developers have pounced on every opportunity they can find. Lately, they’ve set their sights on Park Place.

Though the street spans just three blocks between Greenwich Street and Broadway, near City Hall, it is now home to several new towers. These include Robert A.M. Stern’s 82-story 30 Park Place, developed by Silverstein and branded by the Four Seasons, and The Woolworth Tower Residences, condos designed by French architect Thierry W. Despont in the top 30 floors of the historic skyscraper.

“The opportunity to create in such an iconic [property] immediately interested us,” Burger said of 30 Park Place, “and [finding] a site to develop in a historically landmarked area is not only rare, but incredibly exciting with new ground-up development.”