Can You Kondo-ize A Victorian House? 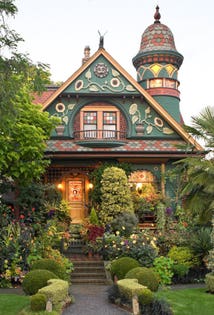 Can a house as exuberantly Victorian as this be Kondo-ized? The answer might surprise you.William Wright

Does a Victorian house lend itself to the precepts of Marie Kondo? In other words, is there a place where a house style known for its exuberance can be in harmony with a style guru who leans towards minimalism? Kondo tells us to “tidy up,” so we wondered whether that’s possible in a house full of bays, towers and architectural ornamentation.

“It depends on what you mean by ‘tidy up,’” says Brian D. Coleman, an author who writes frequently on Victorian design. His own Victorian house on Seattle’s Queen Anne Hill has become a tourist destination sought out for its uninhibited design.

“If, by ‘tidying up’ you mean paring down to just one object on a table, then I’d have to say no. The Victorians celebrated form, color and craftsmanship, and they took delight in their collections.”

“All things go from fabulous to reviled and then back again,” says long-time Old House Journal editor Patricia Poore, citing mini-skirts, beards, and the color pink. “Mid-century Modern is what’s cool now, but I well remember the Victorian Revival that started in the late 1980s. The thing is, architecture and history needn’t be lost just because fashion changes.”

Coleman points out that things can spark joy even if they are surrounded by other things.

“My walls are covered with objects, and they bring me joy,” he says. “The important thing is not how much stuff there is, but how artistically it is displayed. No one likes rooms that are cluttered and dark.”

“I’ve been in Victorian houses so layered you can barely see, or take a step!” says Poore. “The important thing to remember is that Victorian isn’t a style, it’s a time period.

“A house built in 1885 is Victorian whether the walls are painted white or wallpapered in three patterns. Decorating and furnishing are ephemeral, so do what makes you happy. Of course it’s possible to Kondo-ize a Victorian-era house, if by that you mean ridding it of excessive junk that blocks energy or makes you unhappy. In fact, a case could be made that spare, uncluttered rooms actually play up beautiful architectural elements like stained glass and carved mantels.

“However,” Poore continues, “it’s not OK to remove the 130-year-old glass and mantels. Treat them as art objects. Or buy a different house.”

She stresses that décor is a matter of taste.

“My secret favorite Victorian is a mansard-roofed cottage with Gothic ornament that is as spare as any modern interior. It was meticulously restored by an artist–designer, who preferred a certain purity. She even painted the exterior white, which somehow did not obliterate its bargeboards and vivacious trim. Indeed, the house now resembles Mademoiselle in her petticoat.

“Inside, rooms are ethereal in white, cream, ivory, and ecru, walls and furniture alike. Now mind you—she did not tear out pocket doors and moldings. There’s nothing to distract the eye from an original stained-glass window; when the sunlight hits it, translucent pastels are thrown across floors and walls. It’s exceedingly calm and beautiful.

“You never know what’ll work if the vision is clear.”