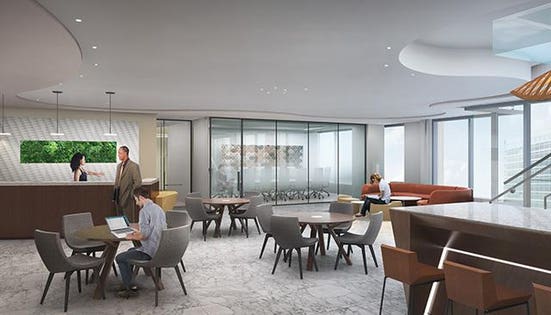 Austin-based Firmspace is nearing completion of its high-end coworking location in Houston, designed by Page.Courtesy of Firmspace

Houston’s coworking properties represent a small, diversifying slice of the metro office market as a plethora of players deliver their concepts of flexible work space.

Among the latest providers to enter the market is Firmspace, based in Austin. Its luxury-end, security- and services-minded iteration targets established professionals and small firms  – rather than creatives and startups, though it will have kombucha tea on tap in the break room.

The three-year-old company launched its second location, in Denver, a year ago and has plans to roll out flex-space facilities in another half-dozen U.S. markets, ultimately enabling access reciprocity for members who travel.

In announcing the $5.5 million project, which is welcoming its first tenants (a mix representing oil and gas, private equity, legal and real estate) later this month, company founder and CEO Matt Ferstler said the launch in Houston serves an unmet need within the city’s current coworking market and is “unlike anything we’ve ever done.”

The upscale facility joins Houston’s increasing footprint of flexible office space, which JLL recently pegged at 3.1 million square feet, about 1.9 percent of the office market’s total 168 million square feet, in its industry assessment, “Flexing Their Muscles: Markets to Watch in 2019.”

As buildout wraps up, a tour showcased what the cushy concept is (service-, privacy- and security-minded) and isn’t (a room full of communal tables).

Its large reception area – featuring a dramatic glass-sided staircase and a living wall of petrified reindeer moss that doubles as a sound-absorbing sponge – accommodates a concierge station intended to field a host of business and hospitality services.

For privacy, however, frosted panels blur offices and doors from knee- to forehead-height. And sound mitigation systems (including the reindeer moss wall in the reception area) temper the volume of any collaborative exuberance.

“It’s like traditional executive suites, but better,” Ferstler noted on the tour.

Raised in Houston, he wanted his growing company’s third outpost to be spot on in terms of its presence, its user services during the work day and after hours, and its energy capital vibe.

Each of the locations, whether completed or in the chute, channels the nuances of its host city’s business culture, Ferstler said.

In terms of design for the Houston venue, for example, “We drew our inspiration from curves and fractal shapes found within a geode stone for texture and natural rock formations for the color palette,” Page Design director Jen Bussinger said in the project’s announcement.

From the supply side, with the rise in flexible space offerings, “office users now have more options than ever before,” noted Russell Hodges, managing director, JLL Houston agency leasing team. “Though coworking will never fully replace traditional occupier solutions, the concepts and best practices are clearly filling a void in the marketplace.

“Landlords are actually learning a lot from some of the more successful coworking operators, which is causing those landlords to completely rethink common area spaces, amenities and hospitality offerings.”

On the national level, the research report determined flexible work space is “not a passing trend.” Flexible space options have grown at an annual rate of 23 percent since 2010. In 2018, it accounted for nearly two-thirds of the occupancy gains nationally. And by 2030, it could comprise about a third of the market, compared to 5 percent today.

Although some markets are better positioned for rapid growth, there’s “significant runway” for expansion across all U.S. office markets,” said Scott Homa, JLL senior vice president and director of U.S. Office Research in the report summary. “We also expect to see continued disruption of the traditional lease model as investors, occupiers and operators come to terms with a new—more flexible—way of business.”