Take A Peek Inside Fabled Getty Mansion Selling For $29 million 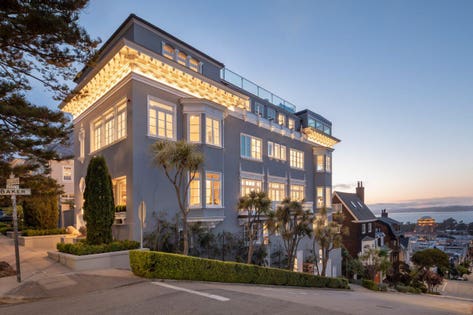 Located on a coveted corner lot, this mansion designed by Louis M. Upton is a grand presence on one of the most prestigious streets in San Francisco’s Pacific Heights neighborhood.Jacob Elliott

The stunning San Francisco mansion once owned by oil heir William Getty and his philanthropist and socialite wife, Vanessa, returned to the market February 8 with an asking price of $29 million, currently the most expensive listing in San Francisco.

The home, which was designed by famed Bay Area architect Louis M. Upton in 1912, has undergone a dramatic facelift to meet the needs of contemporary buyers while staying true to its historic integrity.

“The property has received all of its permits, and it’s turnkey ready,” said listing agent Ludovico Mazzola of Compass real estate agency in San Francisco.

The 9,700-square-foot, five-level home on a corner lot at 2900 Vallejo St. has six bedrooms and 8.5 bathrooms. The mansion, which has an abundance of natural light, is layered in luxurious amenities, including an elevator, wine cellar, au pair suite with its own amenities, basement with gym and sauna, and a three-car garage with a hydraulic lift and adjacent office. There is also a one-car garage.

“The idea was that there is a market for homes of this scale, and it should be done to a certain level of quality and integrity in order to match its original conception in 1912,” said Mazzola.

The foyer with marble flooring leads to the elliptical spiral staircase with brass railing and steel spindles.Jacob Elliott

The eat-in kitchen is the heart of the home.Jacob Elliott

With sweeping views of the Bay, the masterpiece atop a hill is near the stately residences of venture capitalist Pierre Lamond and Senator Dianne Feinstein and her husband, Richard Blum, a giant in the investment banking world.

The Gettys bought the mansion in 2002 and sold it in 2015 to Mazzola’s client, who respected and reimagined the property with the intention of flipping it.

The mansion underwent substantial structural and cosmetic upgrades right down to the studs to bring it into the present.

“Quite a lot of steel was put into the property to make it more robust, and all of the interior was redone,” said Mazzola. “There are some original wooden beams from the 1912 home, but the systems of the home are all new. It’s really a state-of-the-art new home.”

The project involved seismically upgrading the home with steel beams. The stucco exterior was removed, moldings were recast, and the home was waterproofed and re-stuccoed.

“We redid the facade, but it’s an exact match of what it was historically because it’s considered part of San Francisco history,” said Mazzola.

The 55-foot frontage of the property suits the grandeur of the mansion with an arched entryway flanked by two stone lions standing sentry at the 8-foot-tall wooden entry door. One can simply imagine the dignitaries and pillars of high society who visited the sprawling estate.

“There is something about the frontage that pays homage to its past,” said Mazzola. “That’s the type of elegance San Francisco afforded itself in the past and can no longer do because we don’t have the space to do that anymore.”

The three-car garage with a hydraulic lift and adjacent office. There is also a one-car garage.Jacob Elliott

Atop the elliptical stairway, a glass ceiling opens to a panoramic rooftop terrace.Jacob Elliott

The impressive 700-square-foot rooftop terrace addition is a welcoming retreat, showcasing panoramic views of the city. “It adds a new dimension to the new home,” said Mazzola.

“With growing wealth in the Bay Area and Silicon Valley, a lot of people now have the money to buy homes of this scale, but they don’t have the time or interest to do the renovation,” he said. “Our client wanted to speak to that luxury market and say ‘look we understand who you are, we’ve done all the heavy lifting for you. All you have to do is move in’.”