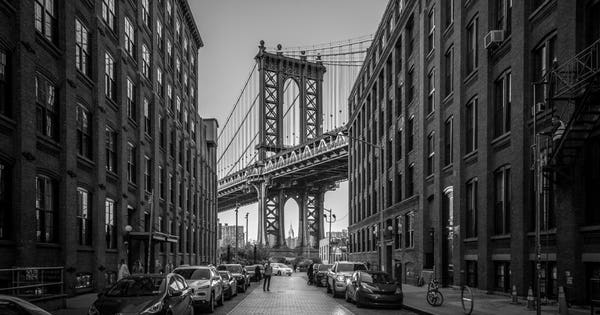 New York, United States of America – November 18, 2016: Pillar of Manhattan Bridge as seen from an alley in Dumbo district in BrooklynGetty

Intelligent, ambitious and sometimes goofy college kids are part of the continual creative renaissance in New York City whether us older people like it or not. They also help us learn to be better citizens and neighbors by living among people of all ages.

A Brooklyn high-rise called The Azure became the focal point of titillating tabloid coverage a week ago as The New York Post reported a handful of residents are upset, accusing college students who live in the luxury building of wearing pajamas, talking loudly in the gym and sunbathing topless on the roof deck.

The Post reported that the 29th-floor roof terrace that boasts views of the State of Liberty is a common place of tension for the residents.  “There were girls sunbathing topless up there,” said a tenant with a young child, according to the Post. “My wife was like, ‘WTF?!’ There are a lot of families [here].”

The story hit the urban zeitgeist, getting republished at Fox News, The Gothamist, and The Real Deal because it had all the right elements: town / gown tension, real estate squabbles and, best of all, boobs. Cue up the soundtracks to Hollywood films like American Pie, Neighbors and Old School.

I took the story personally because the New York Post noted that 30 percent of the 150 apartments in the Azure building are rented by The King’s College (where I teach) for students. The allegations were ironic for a private liberal arts Christian college that aims to teach students to be good citizens and have strong character as well as a strong intellect. The student handbook bans drugs and alcohol in campus housing and doesn’t allow students to have opposite-sex overnight guests. They even must observe quiet hours between 10 p.m. and 7 p.m. Students this week started circulating a petition to ban porn on campus wifi, similar to a movement at Notre Dame University.

“I didn’t know you all had so much fun over there,” said the subject line in an email to me from Buzzfeed editor Ben Smith. He suggested the image of raucous party girls from a Christian college might have been so appealing it’s “too good to check as they say in the tabs.”

My first response to the Post story is that King’s students are being unfairly targeted by a small group of angry residents at the building and by a piece of thinly sourced journalism at Post. Let’s take the allegation by the anonymous source that it must be college students (and an intimation it was King’s students) sunning themselves topless on the roof deck. I am told students from other colleges also live in the building. Did someone ask the sunbathing people if they are in college? If so, were they asked which college they attended? Did the students bear a tattoo of their respective college? Any student ID check?

Also, toplessness is legal in NYC. Web sites such as barstoolsports.com made fun of some of the complainers, questioning why local residents were so grossly offended by the free the nipple movement allegedly happening on the Azure rooftop? ” We’ve got girls sunbathing topless on the roof! What a horror to be the husband in this family!” wrote one writer who goes by the moniker “Hubbs.”
“Perhaps proximity to carefree youth has caused these grown-ups to revert into babies, or perhaps the problem is that overexposure to an abundance of privilege has a funny way of turning people of all ages into assholes,” writes Claire Lampen in the Gothamist.

The Post story didn’t include some other key elements of the back story: The small group of Azure residents have had an ongoing campaign to media and the Internet to complain about their college student neighbors. They sued the building for $5,000 and the lawsuit was thrown out by a judge, according to school and building sources. School and building sources say the students generally behave well, are good neighbors and are not a problem. In the past, King’s students have been falsely accused for random property damage in the building.

We could critique the quality of reporting and attribution throughout the piece ad infinitum. But I’m more interested in the implications of town and gown tensions in New York City.

College students are good for NYC

Pete Saunders, another Forbes contributor, recently crunched data from the U.S. Census American Community Survey for years 2010 and 2015. His data shows that New York City saw the strongest rate of overall population growth but took 19th place among cities when it comes to population growth among educated millennials, trailing Chicago, Austin, St. Louis and other cities.
New York City always has been an important hub for media and journalism organizations and jobs. A report by the Nieman Lab at Harvard University shows that nearly 20 percent of reporting jobs are in New York, Los Angeles or Washington D.C., compared to only 12.5 % of reporting jobs being located in those cities in 2004. “A mong digital media and startup jobs, nearly 4 in 10 — 38.9 percent — were located in New York, D.C., or their suburbs,” the report noted.

New York University has grown dramatically in recent decades in terms of applicants, students, alumni and employees. A report from NYU shows more than 42,000 students now attend its undergraduate and graduate programs. NYU employs 16,475 people, making it one of the city’s top 10 employers. It boasts 360,000 alumni with two thirds of those alumni living in the NYC Metro area.
More colleges are moving to the city to springboard growth. Cornell University from Ithaca has opened a campus in NYC proper. Over the years, so has New York Institute of Technology, Nyack College and Molloy College from Long Island. Nyack College, when it encountered financial trouble recently, closed its Nyack location and announced it would move its entire campus into lower Manhattan. The mayor’s office, along with local media organizations and universities, created the NYC Media Lab in 2010 to spur innovation and startups from local universities. My team at VettNews is currently one of 8 startup teams in the Combine accelerator of the NYC Media Lab. Local universities bring youth, intelligence, technology, jobs and innovation to New York City.
King’s, where I teach and lead a set of growing journalism programs, moved from Briarcliff Manor, NY, to Manhattan in 1999. We are steadily growing our enrollment, drawing hundreds of talented young people from around the U.S. to study in lower Manhattan. King’s rigorous liberal arts curriculum aims to teach students to be good citizens and good neighbors, not just to be high-earning workers or to possess keen intellects.
Universities such as King’s bring needed diversity to New York City, including geographic diversity, religious diversity, ethnic diversity and gender diversity. We even have a program at King’s called the NYC Semester program that welcomes students from 35 other partner schools around the U.S. (from Mississippi to Minnesota) and world (from Norway to Morocco) to apply to study journalism, theater or business at King’s for a semester. We are providing pathways for young people who would never be able to land a job or apartment in NYC to have a path to land an internship and a job. That’s good for New York City.

Everyone who moves to New York City joins an incredible, robust machine. Many of us arrive in our 20s and experience the energy of the city as we make our way in our professions. As we get older and have children and become managers, we should not forget that we were once young. Neither the world nor New York City centers on my own needs. And it never will.

College students need to learn to be polite, empathetic and considerate of neighbors and fellow New Yorkers. That is one of our goals at King’s as we educate our students. Perhaps the situation offers a lesson to all New Yorkers, including 20-somethings, 30-somethings, 40-somethings and 50-somethings. When you contract to rent shared space in a luxury building and a big city, you are choosing to live among other people. If you don’t like your neighbors, perhaps you should move to another, more affordable city or suburb and look for a single-family house.

It seems the boobs most exposed at the Azure in Brooklyn are those who are making petty complaints based on questionable information or ill-formed judgements about their neighbors. Those neighbors might make a great intern, a wonderful babysitter, a dog walker for you. That younger neighbor might also create a new company and be your boss one day.

If New York City will remain a competitive economic metropolis, its residents need to say YIMBY – Yes in my backyard – to colleges, tech  startups  and students. Maybe they  even  need to say YOMBY – yes on my rooftop balcony.

Paul Glader is a professor of journalism at The King’s College in NYC and is a media scholar with the Berlin School of Creative Leadership. He’s on Twitter @paulglader.