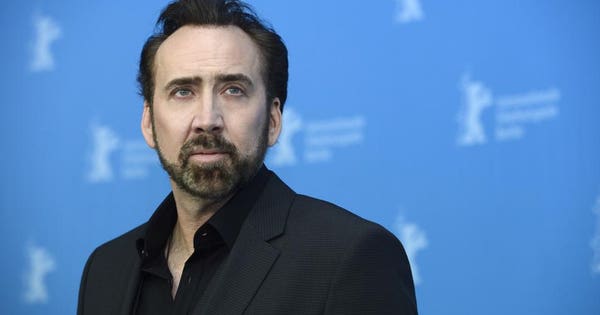 Actor Nicolas Cage’s former San Francisco home doesn’t register as a national treasure, but it may be a Bay Area one. The 898 Francisco Street residence just hit the market for $10.95 million—along with an adjacent 40 x 60-foot Hyde Street vacant lot offered at an addition $3 million (if purchased together). Compass’ Mark Allan Levinson holds the listing for the properties which were previously on sale in 2017.

Cage was attracted to the estate’s Gothic-inspired features like the stone archway and an wrought-iron gate.Open Homes

Views are paramount from each sector of the home, courtesy of large picture windows.Open Homes

The estate was built for $30,000 in 1914 for Armenian sculptor Haig Patigian by architecture firm Ward & Blohme, designers of Machinery Hall and San Francisco’s new firehouses built after the city’s devastating 1906 earthquake. Patigian, sculptor of Golden Gate Park’s John Pershing statue, designed the decorative façade panels for the home, which boasts 60 feet of frontage along Francisco Street and a manicured garden-style backyard.

The four-story residence retains much of that period’s architectural charm, especially the imposing Gothic-inspired entrance (a stone archway embellished with a cross and a wrought-iron gate), decorative leaded-glass windows, and original wood detailing.

Beyond the distinctive archway and gate, the home spans 6,305 interior square feet, welcomed by a grand foyer, powder room, stately staircase and cozy library with a wood-burning fireplace. The formal classic dining room is beautified by the decorative leaded glass and original wood beams as is the living room which flaunts two Gothic-inspired chandeliers, Gothic wall patterns, a wood-burning fireplace and bay views.

The second level boasts three ensuite bedrooms and bathrooms, including the master which has two dressing rooms, one an entirely hand-stenciled in wood murals.

The third ensuite bedroom and bathroom offers sweeping north bay views from the Marin Headlands to the Oakland Hills.

The residence has six bedrooms, including this master suiteOpen Homes

Cage (born Nicolas Coppola), the Oscar-winning star of Leaving Las Vegas, is the eccentric member of the famed Hollywood Coppola clan. Like his National Treasure character, he’s a history connoisseur, a real estate adventurist—collector of beachfront homes, European castles, a tropical island and even an alleged haunted house (the notorious New Orleans landmark LaLaurie Mansion where a sadistic 1830s socialite was exposed as a serial killer who tortured slaves).

Nicolas Cage once owned the notorious French Quarter LaLaurie Mansion, before it was foreclosed. (Flickr Vision)Getty

Cage also invested in too many luxury cars, Superman comic books, shrunken pygmy heads, a pet octopus, a pyramidal burial tomb, and a 70-million-year-old dinosaur skull (for $276,000). Why wouldn’t we expect a circus from the man who once slept in Dracula’s castle and named his kid after Superman—a self-admitted Elvis Presley-fanatic who married The King of Rock-n-Roll’s daughter who was The King of Pop’s (Michael Jackson’s) ex-wife?

You didn’t need Ben Franklin’s fictional 3D glasses to see Cage’s spending sprees were unsustainable. Exotic spending and back property taxes caught up to the elusive thespian, forcing foreclosure on most of his homes.

This 898 Francisco residence was one of Cage’s few homes unspoiled by decadence—and bizarreness. Considering its majestic perspective on Russian Hill, that seems appropriate, for a change.