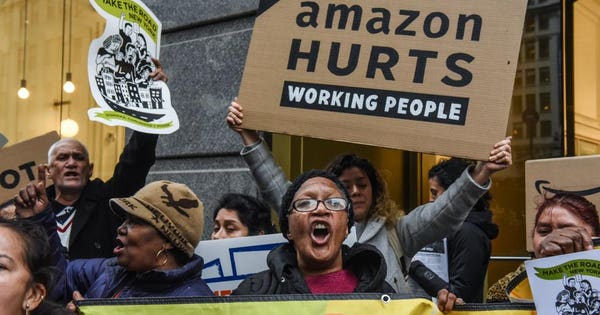 People opposed to Amazon’s plan to locate a headquarters in New York City hold a protest outside of an Amazon book store on 34th. St. on November 26, 2018 in New York City. Amazon recently announced that New York City will become one of two locations that will house Amazon’s second North American headquarters, known as HQ2. (Photo by Stephanie Keith/Getty Images)Getty

Amazon’s New York City-based HQ2 is getting some pushback — and it appears the megalith retailer is actually reconsidering its decision to put down roots in the Big Apple.

Homegrown lawmakers like the Bronx’s Rep. Alexandria Ocasio-Cortez and Sen. Michael N. Gianaris from Queens have come out against the project in recent weeks, as have various city council members and community leaders. Some cite infrastructure issues, while others say it goes against New York values. Amazon has made it clear it won’t support employee unions — a longtime staple of the New York workforce. Other opponents say Amazon’s move into outlying cities will push lower-income earning residents out with higher rents and even higher costs of living.

Real estate professionals, though? They’re on the other side of the fence. In fact, a Long Island City real estate broker created a petition last week to show his support for HQ2, and it’s since gained nearly 3,500 signatures. The Real Estate Board of New York, the Queens Chamber of Commerce and major brokerages like Douglas Elliman have all shared the petition on their respective social media accounts.

As Dave Diedrich, a local Redfin agent explains it, “Real estate pros in the area are chomping at the bit to be a part of this super growth pill. They are getting behind the support of the project and having petitions signed to support this move. I would even imagine the industry becoming even more saturated in the area with wide-eyed, brand new agents trying to get a piece of the pie.”

Eric Benaim, the petition’s creator and CEO of Long Island City-based brokerage Modern Spaces, says Amazon’s pull-out would be a grave mistake — a bold-faced message to other potential employers who might be considering the area.

“By saying no to Amazon, New York City is essentially saying ‘no’ to any company that would consider coming to the city to do business,” Benaim said. “If we, as a city, reject this deal, we will send the message that New York City is closed for business.

Benaim has been a resident of Long Island City since 2006 and calls himself an “ambassador” for the city.

“If the Amazon deal falls through, it not only effects Long Island City but also New York City as a whole,” Benaim said. “Other businesses won’t be attracted to the area because they will know NYC kicked out the biggest company and rejected the biggest economic impact in the history of the state.”

And that economic impact would be huge. According to John H. Banks, president of the Real Estate Board of New York, Amazon’s pull-out would mean losing out on tax revenues, jobs and overall economic growth across all five boroughs.

“From generating tens of billions in new tax revenue, to creating good-paying jobs, to supporting the real estate market, to making our economy more resilient, this project is absolutely critical for New York,” Banks said. “It’s a once-in-a-generation opportunity to position our city and our economy for the future.”

Losing HQ2 would cost Long Island City and larger New York up to 40,000 jobs. Estimated revenues over the next 25 years from a local Amazon headquarters are estimated at $27.5 billion.

“Turning down the creation of thousands of high-paying jobs is rare, if not completely unprecedented,” Willett said. “Cities generally chase those opportunities, evidenced by the hundreds of initial bids for Amazon HQ2. It’s not unusual for there to be some complaints about the magnitude of incentives offered in attracting big employers, but objections generally don’t come from within the staff of government officials.”

Not the End of the Road for LIC

Losing out on Amazon wouldn’t be the end of Long Island City. In fact, according to most local real estate pros, the city has been on the up and up for years.

According to Jesse Stein, chief investment officer for New York-based Compound Asset Management, LIC was already brimming with new developments before the HQ2 announcement was made.

“[The pull-out] may slow down some developments in Queens that were anticipating fresh demand from Amazon employees, but Long Island City was already one of the most prolific neighborhoods in terms of development projects in the city before the announcement,” Stein said.

LIC has been one of the country’s fastest-growing communities for years — at least in terms of housing developments. The city has gained more than 12,000 new apartments since just 2010 and millions have been earmarked for infrastructure improvements and other community projects.

“In the bigger scheme of things, Long Island City has been a market that has been very rapidly developing over the last five years with thousands of new units and buildings coming to the market, many of which have tax-abatements,” Lavrenov said. “The main draw for LIC will always be accessibility and proximity to Manhattan, so in the current state of the market, even without Amazon, it is a market that has done relatively well.”

Joe Ben-Zvi, chief operating officer for insurtech firm TheGuarantors, says it’s important to remember that Amazon has been offered serious incentives to call LIC home — and if they pull out, other businesses could presumably leverage those same perks in their place.

“This reversal would forfeit a massive growth opportunity, but these incentives are available to other companies as well,” Ben-Zvi said. “Since the city is turning over, it is an attractive space for businesses to explore. In the event Amazon did back out, it could be anticipated that other corporate or tech companies would look to expand into the area. Developers should still continue to build since this has put LIC on the map and other businesses have begun to see benefits of the area and space.”

Though many argue that Amazon’s pull-out would keep New York from morphing into the nation’s next tech hub, other recent development deals beg to differ. In October, Google announced plans for a new campus outside the West Village, while Facebook is reportedly considering an expansion further into Manhattan. Savills also recently named New York the world’s premier tech city.

How Likely Is It?

Consequences aside, just how likely is it that Amazon will pull-out? According to most, the chances are slim.

“I personally believe it is a long shot that Amazon pulls out,” Stein said. “The backlash to the backlash is in full steam, and the major political power players are all in favor of Amazon coming.

When you throw in recent poll results that New Yorkers overwhelmingly support a local Amazon presence, leaders could have serious problems on their hands should the deal fall through. In fact, Joel Kotkin, professor of Urban Studies at Chapman University, says losing the deal would mean serious “embarrassment” for New York leaders.

“It would certainly undermine confidence in governance,” Kotkin said. “You can’t empower anti-capitalist ideologues and expect the capitalists to embrace them. I still think they will work this out, because the embarrassment would be severe.”

At the end of the day, Gill Chowdhury of Warburg Realty says it’s all just a “negotiating strategy” for Jeff Bezos and Co. — and that HQ2 will indeed make its home in Long Island City.

“The fact that some people were upset is irrelevant,” Chowdhury said. “People protest almost every single new high-rise. The protest occurs, is defeated, and the high-rise goes up like clockwork.”