Valentine’s Day Gift Guide: From Majestic To Modest, The Perfect Art Book Pairing For Your Paramour 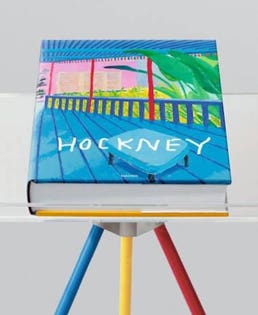 Whether you’re invigorated by a new crush, or working to keep the fire ablaze, Valentine’s Day can be daunting. Even if the object of your affection imposes a no-gift policy, it’s always a treat to get something special that doesn’t break the bank. While fine art isn’t everyone’s passion, it’s a ubiquitous part of our daily lives and cultural identity. By carefully curating the right art book, you may cultivate an aspiring aesthete or indulge your beloved’s lifelong love affair with fine art.

The art market is holding its breath ahead of Christie’s London March auction of British Pop Art pioneer David Hockney’s double portrait of well-known gay couple “Henry Geldzahler and Christopher Scott” (1969), which is poised to pull in some £30 million ($38 million). “Portrait of an Artist (Pool with Two Figures),” a double portrait from the same series painted three years later, sold in November at Christie’s for $90.3 million, a new global record for a living artist.

TASCHEN’s first SUMO (named for its size) publication for a painter, David Hockney. A Bigger Book by book designer and editor Hans Werner Holzwarth, is a delicious visual journey of more than 60 years of work, from Hockney’s teenage art school years to his recent portraits, iPad drawings, and Yorkshire landscapes. Assuming you’re not one of the world’s elite art bidders, this delightful Collector’s Edition (Nos. 1,001–10,000), signed by Hockney and accompanied by a Marc Newson bookstand is a relative steal at $2,500. The 498-page hardcover includes 13 fold-outs, along with an illustrated 680-page chronology book.

New York fine art dealer Howard Rehs didn’t have a chance to display “La Réception au Château,” a pristine framed oil on canvas by 19th-century French artist Adrien Moreau, as a collector quickly snapped up the masterpiece, that had emerged on the market after 130 years, upon walking into Rehs Galleries, Inc.

Nearly a half century after it was first published, The Romantic Rebellion: Romantic Versus Classic Art by renowned British art historian, gallerist, museum director, and broadcaster Kenneth Clark, retains its value as a primary text for those who want to make sense of the vast breadth of master works spanning the second half of the 18th century to the middle of the 19th century. Perhaps learning that the emotional volatility and fear depicted by Romantic painters, with visceral images of devastating storms and bloody battles, wasn’t always at odds with the apparent serenity of Classicism will spark a lively discussion with your partner. Get the classic hardcover (John Murray Publishers, March 3,1974, 366 pages) for $80.38 plus $4.88 shipping.

Lost In The Abstract

Your eyes met across a crowded room. Love at first sight, just like Natalia Goncharova and Mikhail Larionov. You swoon, and hint that you’re headed to the Guggenheim on Saturday. “I don’t really get modern art,” he says. You conceal your panic like a secret drawing revealed only under UV and infrared lights.

Pictures of Nothing: Abstract Art Since Pollock by Kirk Varnedoe, the Chief Curator of Painting and Sculpture at the Museum of Modern Art in New York for 13 years who wrote a book to appeal to a lay audience, with no previous knowledge of abstraction required. Get the hardcover (Princeton University Press, Oct. 29, 2006, 297 pages) delivered quickly for $41.76.

If the object of your affection loves fashion design, s/he most likely slowed the line transfixed on “Alexander McQueen: Savage Beauty” at The Met Fifth Avenue in 2011. The exhibition, organized by The Costume Institute, saluted the late McQueen’s short but legendary career that tore through boundaries across art, culture, politics, and personal identity.

Whether your well-heeled sweetheart made multiple visits or missed the show, the 293 page full-color book with a luscious lenticular cover by Andrew Bolton, will let him/her luxuriate over images of some 100 ensembles and 70 accessories primarily from the McQueen Archive in London, along with some pieces from the Givenchy Archive in Paris, as well as private collections. Alexander McQueen: Savage Beauty is available at the Met shop or online for $50 or $45 for museum members.

Young black emerging artists wrangling with art, politics, and racial identity used innovative, original art to power a surge of radical transformation between 1963 and 1983. Learn about the artists who didn’t leave the same legendary mark as Jean-Michel Basquiat, but who made an impact on black feminism, AfriCOBRA, and other artist-run groups. Delve deep into the role of museums in the debates of the period, and visual art’s relation to the Black Arts Movement.

Art That Changed the World
Published by DKDK

Does your sweetheart need to sound like an expert on every topic? Help him captivate the cocktail party crowd by learning the story of every major art style, movement by movement, in just one book that provides a visual timeline of key paintings and events that led the progression.

Each section of Art That Changed the World features a lavish double-page image of an important painting that embodies each transformative art movement. The hardcover (DK , Aug. 18, 2013, 400 pages) delivers a lot of fodder for witty banter at $40.

Does your crush have a kid? It’s tough enough navigating new relationships, and everything is complicated when there’s a young life at the center of your attraction.

Despite its title, ART FOR BABY, an oversized board book boasting high-contrast black-on-white works of modern art, is great for young ones ages 3 to 18. It’s ideal for art lovers who want to teach their kids about contemporary masters, as it’s light on text and big on images. Grab the cushy board book (various editions and publishers, 2008-2009) now for $16.99.

Have you been swept away by a jetsetter who tours all the greatest art destinations? Not yet? Compromise, and take your love on a journey of an extraordinary look into world’s museums with easy-to-navigate, color-coded galleries and rooms.