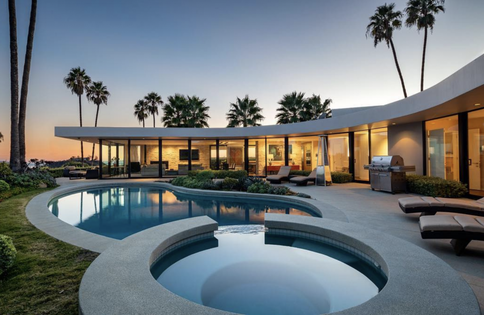 Tesla and Space-X co-founder Elon Musk (No. 54 on Forbes Billionaires) has decided to part ways with his curvaceous, tech controlled home in Brentwood, California in favor of the several other properties he owns around Los Angeles. This home calls to mind an angular spaceship design and since his company is hard at work building its own rockets it might be more than he needs to have a home that looks like one. Musk and ex-wife Talulah Riley purchased the home in 2014 for $3.695 million (though property records show it is partly in the name of Talulah’s mum, Una) and are now shopping it as an off-MLS listing for $4.449 million with luxury brokerage Hilton & Hyland.

The 4-bedroom, 3-bath midcentury modern embraces its position at the very tip of a flatiron-shaped lot by using a boomerang design to maximize the available build space. By having the softly curved wall look out onto a backyard with tall privacy hedge it can be made of floor-to ceiling windows to let in as much light as possible without letting anyone see in. Here’s the hallway which shows the curved nature of the design.

The 3,000 square feet house makes use of spacious open plan rooms, such as this living room off of the kitchen. The sliding glass doors out to the pool and a painted brick wall almost give it the feeling of being outdoors even though it is very much inside.

An open plan living room next to the kitchen.Hilton & Hyland

Here’s the sleek kitchen to go with the futuristic vibe.

Wolf and SubZero appliances in the kitchenHilton & Hyland

And the master bedroom has its own private door to the backyard.

One of four bedroomsHilton & Hyland

The curtains, such as the ones in the windows above, can be electronically controlled from a mobile device, as can the the security system, sound speakers and lighting. The home is also built with a few earth-friendly features including dual tankless hotwater system, dual-zone climate control and irrigated drought-tolerant landscaping. The ivy-clad walls that lead to the front door also add some green to the house.

Here’s a final view from above to show the way the home fits perfectly on to the oddly-shaped lot.

The flatiron-shaped lot influenced the final shape of the home.Hilton & Hyland