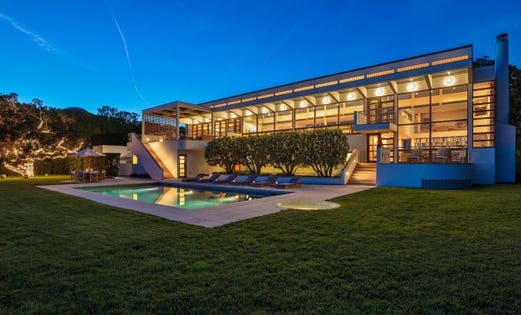 The home is asking a record-breaking price of $125 million.Simon Berlyn Photography

It wasn’t even a year ago that Malibu set a record-breaking price for home sales when Hard Rock Cafe co-founder Pete Morton sold his home on Billionaire’s Row for $110 million and now another home has come to market ready to surpass that. NBCUniversal executive Ron Meyer has listed his house sitting atop its own private bluff for $125 million.

The five bedroom, 7.5 bathroom contemporary was designed by one of the famed ‘New York Five’ architects Charles Gwathmey, most known for his renovation of Frank Lloyd Wright’s Guggenheim Museum in the 1990s as well as many luxury homes owned by the world’s billionaires (even Bernie Madoff owned one of his houses for a time, this Hamptons hideaway that has been re-imagined by Steve and Daryl Roth with an asking price of $21 million).

Meyer has reportedly been looking for buyers since the middle of last year, but only listed it publicly for sale as of last week. As The Hollywood Reporter noted, at a recent star-studded event held at the home, hosted by Chanel and the Natural Resources Defense Council, Meyer was said to be giving private house tours to get the word out about the home’s sale. Barbra Streisand, Jennifer Aniston, Courteney Cox, Cindy Crawford and many other celebrities were in attendance but so far none of them have signed up to buy the place.

Whereas the previous record-breaker was near the popular Carbon Beach, this nearly 14,000 square foot home is incredibly secluded as you can see in this view of the backyard with views over the Pacific Ocean. The three acre lot also comes with a pool and hot tub (at the far end of the pool) that blends in with the views via the sandstone-colored paving that gives the impression of sand at the beach.

What’s a top of the market listing without a little Hollywood drama thrown in? As was detailed in the book Powerhouse, which chronicled the rise of talent management firm Creative Artists Agency, where Meyer had previously worked the home almost didn’t become home to its current owner. Meyer and former CAA partner Michael Ovitz were on the outs when Meyer announced he was leaving CAA to oversee Universal. Ovitz, knowing Meyer was interested in buying this palatial pad, bought the house himself. He later sold the house to Meyer and in 2016 at an event for Powerhouse said in an interview, “I was pissed off. I made a mistake. Shouldn’t have done what I did. I shouldn’t have bought the property.” But eventually Ovitz had a change of heart and Meyer ended up with the house in 1997, according to Mansion Global. A Hollywood exec making peace with another might also be a record of some sort.

The brokerage has not released any interior photos, but there’s a glimpse inside over on a website for the architect. The exterior photos provide a hint at the design with the wall of rectangular windows and a few subtle curves against the whitewashed backdrop. If you click to expand the photo you can see the porte cochere incorporated into the build of the house. If you do head over to the architect site, be sure to check out the photo of the dining room. There is a mobile that looks like it could have been designed by Alexander Calder.

Click to expand and see the contemporary style.Simon Berlyn Photography

In addition to the main house, the listing comes with two guest houses and a spa house. Other features, according to the listing with Kurt Rappaport of Westside Estate Agency, include a two-story paneled library near the master suite, a state-of-the-art theater, gym and home office.

Here’s a few more pictures from the listing:

There’s a private staircase down to the beach.

The tennis court faces north/south to avoid shadows and glare from the setting sun.

This overhead view shows how secluded the three acre lot is.

There are very few new homes this large in Malibu.Simon Berlyn Photography